Photo by Steve Rhodes. Do not use without permission. 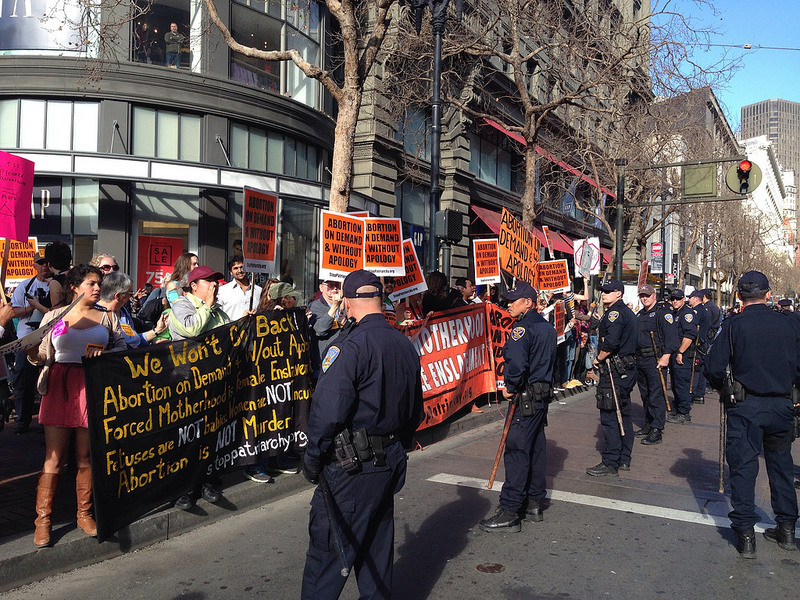 When "Abortion Hurts Women" banners were strung from street lamps on Market Street in the weeks preceding the annual Walk for Life march, City Supervisor David Campos responded by introducing a resolution that says, "the prominent display of false anti-abortion statements on public property on Market Street misrepresents the City's support for reproductive health, rights and justice."

During the march on January 25, thousands of anti-choice demonstrators passed members of World Can't Wait, the Silver Ribbon Campaign, Radical Women, Stop Patriarchy and other groups and individuals who held Pro-Choice signs. One women's health worker said, "Just doesn't seem right not to object publicly" although some, including former SF District Attorney Kamala Harris have said the anti-choice marchers should just be ignored.

California expanded abortion access last year with a measure that allows nurse practitioners, certified nurse midwives and physician assistants to perform one type of early abortion, increasing access to abortion in the state. While changes such as this are encouraging, pro-choice activists say that in other states abortion rights are being stripped away, so they must remain vigilant.
Add Your Comments
LATEST COMMENTS ABOUT THIS ARTICLE
Listed below are the latest comments about this post.
These comments are submitted anonymously by website visitors.