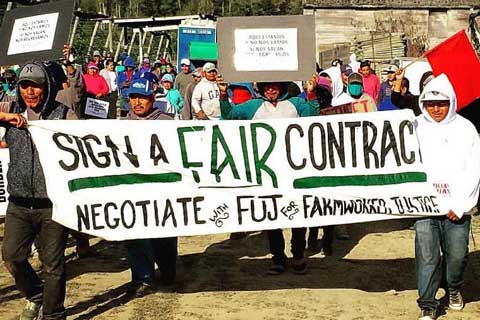 The Alliance of National, State and Municipal Organizations for Social Justice (AONEMJS) and the National Democratic Independent Union of Agricultural Workers (SINDJA) issued a statement clarifying the Driscoll's berries boycott is still in full effect and farmworkers in San Quintín continue to work for recognition of their union to negotiate the signing of a collective bargaining agreement. A rally and protest will be held at the Driscoll's distribution center in Aromas on October 15 as part of an International Day of Action to support the San Quintín farmworkers.

In Washington State, the results of an election on September 12 confirmed the independent union Familias Unidas por la Justicia (FUJ) as the formal representative of farm workers at Sakuma Brothers Farm, a supplier to Driscoll’s. Edgar Franks, organizer with Community to Community Development (C2C), the support organization for FUJ, states: “FUJ represents over 500 Triqui, Mixteco, and Spanish speaking workers at Sakuma Bros. Berry, and is the first farmworker union led by indigenous workers. Despite hardships, workers have shattered stereotypes by organizing across languages and identity. This is revitalizing the worker movement in Washington state and beyond.”

AONEMJS and SINDJA write: After more than a year of struggle that began in the San Quintín Valley of Baja California when more than 80,000 farmworkers rose up in protest in order to improve their working and living conditions, we remain in resistance. In front of government bodies we have reported on the inhumane conditions that farm working families live with daily, our voices have been heard in the Mexican Congress, in the the United Nations, and even in Geneva.

We Clarify and Reiterate the Driscoll's Boycott is in Full Force as it was called for by us more than a year ago and has been supported by consumers in Mexico, the United States, and other parts of the world, by organizations, democratic unions, communities, and consumer groups.