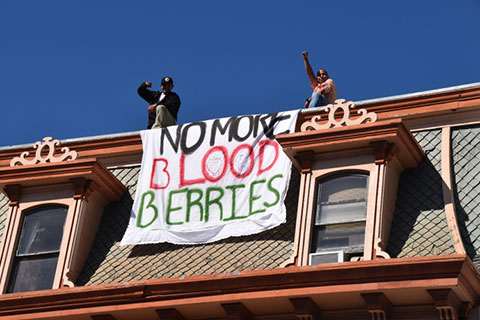 On August 6 and 7, 2016, local activists engaged thousands of people at the 22nd Annual Watsonville Strawberry Festival to raise awareness about the Driscoll's Boycott and the harsh realities of farmworkers who pick the precious berries. The Boycott Driscoll's movement is led by, and in solidarity with, farmworkers in San Quintín, México and Washington state fighting for union contracts.

Demonstrators, including the Watsonville Brown Berets, handed out thousands of flyers for Familias Unidas por la Justicia (FUJ), an independent union formed by farmworkers in Washington state in July 2013. FUJ has over 450 members and holds elections as well as democratically run business meetings. FUJ maintains a website, Boycott Sakuma Berries, which is the best resource online for information in English about the ongoing labor struggle.

Activists also arrived with newly created signs and banners. A banner declaring "No More Blood Berries" was displayed from the third-story of the Lettunich Building on Saturday and from the roof of the Mansion House on Sunday while shouting, "Boycott Driscoll's" and "No More Blood Berries." The buildings are the most iconic structures in downtown Watsonville and stand as subtle reminders of the apple growing, packing, and export industry in the Pájaro Valley. Both buildings are Santa Cruz County Historical Trust Landmarks on Main Street and overlook the Watsonville Strawberry Festival.

Read More with Photos and Video |