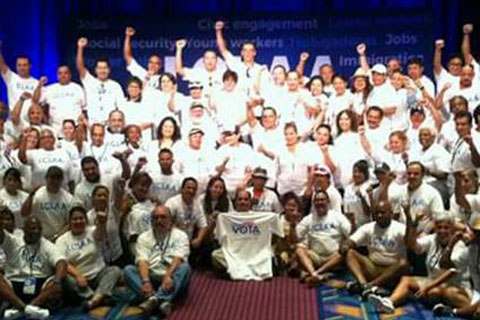 In the resolution, the Sacramento LCLAA Chapter went on record in support of "the struggle of the 70,000 farmworkers in San Quintin and the 468 farmworkers in Skagit County, Washington, for better wages, working conditions, and the recognition of their fighting unions — the Alianza de Organizaciones Nacional, Estatal y Municipal por la Justicia Social del Valle de San Quintín (Alliance of Farm Workers of San Quintín), and Familias Unidas — as the legitimate bargaining agents for the workers."

The LCLAA also reiterates its call on the Driscoll's corporation, and its subsidiary BerryMex, and the San Quintin employers and Sakuma Farms to rehire strikers and sign a contract with the Alianza workers in San Quintin, Baja California, Mexico, and Familias Unidas por la Justicia in Washington State.

The LCLAA also calls upon the California Federation of Labor and the entire trade union movement in the United States to add Driscoll’s to their “Do Not Patronize” list and to actively promote a boycott of Driscoll’s – as well as build ties of solidarity with the San Quintín farmworkers of Baja California, Mexico by, "organizing union-to-union solidarity, visits to San Quintín, and tours to the United States of representatives of the Alianza so that these workers can tell their stories directly to U.S. workers."