Add an Event
Newswire
Calendar
Features
Home
Donate
From the Open-Publishing Calendar
From the Open-Publishing Newswire
Indybay Feature
Publish to Newswire
Add an Event
Related Categories: Americas | California | International | Santa Cruz Indymedia | U.S. | Health, Housing & Public Services | Immigrant Rights | Labor & Workers
WA Farmworkers to Vote on Union / Mexico Farmworkers Continue Driscoll's Boycott
by via Food Chain Workers Alliance
Thursday Sep 8th, 2016 5:55 PM
Congratulations to Familias Unidas por la Justicia (FUJ)! FUJ is an independent farmworkers union and one of our newest members! After a three-year struggle, on September 4, 2016, FUJ reached an agreement with Sakuma Brothers Farm in Washington state to conduct a secret ballot election so the workers on the farm can vote whether they want FUJ to be their union. Sakuma Brothers is a supplier to Driscoll's Berries. 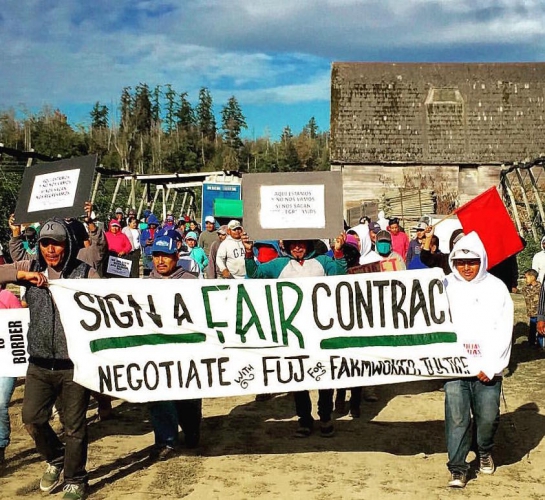 original image (843x773)
This is a big victory as FUJ has been asking to negotiate a contract with management on behalf of farmworkers since 2013 because of child labor, wage theft, hostile working conditions, poverty wages, and impossible standards of production. Please see below for a message from the officers of FUJ about this agreement.

Farmworkers in San Quintin, Baja California, Mexico, continue to organize for living wages and safer working conditions, and they have called on consumers to continue boycotting Driscoll's Berries. The Food Chain Workers Alliance will continue to support and honor the Driscoll's boycott until the farmworkers in Mexico win the dignity and respect that they deserve.

As of today, Sept. 4, 2016 Sakuma Brothers Farms and Familias Unidas por La Justicia have mutually agreed to conduct a secret ballot election within the next 8 days. The election will determine if the employees want to be represented by Familias Unidas por La Justicia in collective bargaining with Sakuma Farms. Thanks to your tireless efforts we are entering into this next phase of our union’s development with hope and determination. At this time we are calling for an end of the boycott, and all boycott activities. Out of respect for the process and our memorandum of understanding with the company please do not contact past, present or potential customers, purchasers, sellers or users of products coming from Sakuma Bros Berry Farm to convey criticism of any and all aspects of Sakuma’s business and operations. 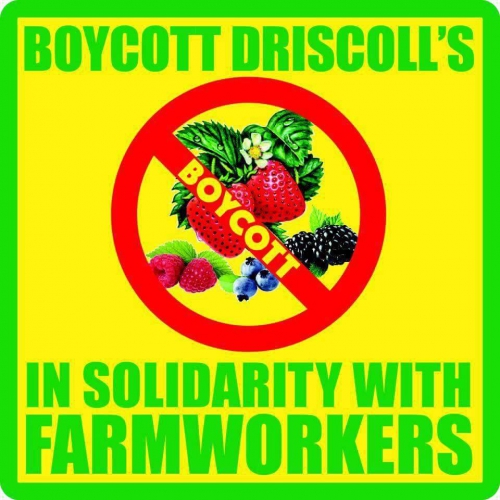