Add an Event
Newswire
Calendar
Features
Home
Donate
From the Open-Publishing Calendar
From the Open-Publishing Newswire
Indybay Feature
Publish to Newswire
Add an Event
Related Categories: Americas | International | Santa Cruz Indymedia | U.S. | Immigrant Rights | Labor & Workers
FWP Applauds Resolution to Four-Year Labor Dispute Between Farmworkers and Supplier to Driscoll's Berries
by via Fair World Project
Wednesday Sep 14th, 2016 2:26 PM
Portland, OR, September 13, 2016 – Fair World Project, a project of the Organic Consumers Association, the nation’s largest network of green and ethical consumers, is proud to announce the results of an election on September 12 that confirmed the independent union Familias Unidas por la Justicia (Familias Unidas) as the formal representatives of farm workers at Sakuma Brothers Farm (Sakuma) in Washington State, supplier to Driscoll’s, the largest berry distributor in the world. Fair World Project facilitated dialogue between worker representatives of Familias Unidas and executives at Sakuma throughout the summer until an agreement could be reached. 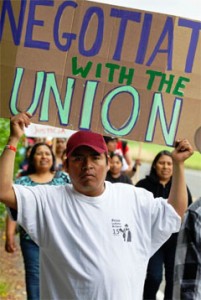 Farmworkers at Sakuma in Burlington, Washington had been locked in a years-long struggle for a fair contract outlining wages, working conditions, and employment terms. On September 4th Familias Unidas and Sakuma reached an agreement that ended their four-year long labor dispute. Part of that agreement provided a process for a free and fair election to confirm Familias Unidas as the representative for hand harvesters at Sakuma Brothers Farm, which took place on September 12th. Contract negotiations between Sakuma and the union will begin soon.

“This is a historical moment. Because farmworkers are excluded from the National Labor Relations Act, which establishes the framework for unions and collective bargaining for most other workers, there are few farms where workers have organized and even fewer independent unions,” said Fair World Project Campaign Director, Kerstin Lindgren. “Both Familias Unidas and Sakuma have shown tremendous leadership and commitment to finding a mutually beneficial outcome. We hope this type of leadership and collaboration can serve as a model for other farms,” continued Lindgren.

Familias Unidas has called for an end of the four-year consumer boycott of both Sakuma and major buyer Driscoll’s. While Familias Unidas has asked all of their boycott committees to cancel events in opposition to Sakuma and to start promoting the farm, some advocates may continue promoting the boycott of Driscoll’s berries on behalf of farmworkers in Mexico who are still struggling for increased pay and dignified working conditions.

In May of 2016, 32 organizations including Fair World Project sent Driscoll’s a letter asking that they uphold their stated commitment to freedom of association by requiring Sakuma management to meet with the workers organized as Familias Unidas. Driscoll’s response was positive and Fair World Project hopes that Driscoll’s continues to insist their suppliers negotiate fairly with workers who choose to organize.

“This news from the fields of Sakuma Brothers Farm is truly inspiring,” said Dana Geffner, Executive Director of Fair World Project. “This agreement is both proof of the power of workers organizing and also proof of the power of consumers who stood in solidarity with these farmworkers during their four-year quest to negotiate a fair contract,” continued Geffner.


Fair World Project (FWP) is a non-profit organization whose mission is to protect the use of the term “fair trade” in the marketplace, expand markets for authentic fair trade, educate consumers about key issues in trade and agriculture, advocate for policies leading to a just economy, and facilitate collaborative relationships to create true system change. FWP publishes a bi-annual publication entitled For a Better World. For more information, visit: http://www.fairworldproject.org.

http://fairworldproject.org/in-the-news/fair-world-project-applauds-resolution-to-labor-dispute/
Add Your Comments
Support Independent Media
We are 100% volunteer and depend on your participation to sustain our efforts!