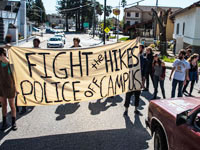 Students at UC Santa Cruz concluded four days of protests against tuition and fee increases with a campus-wide strike and shut down on March 5. Dubbed "96 Hours of Action," demonstrations were held March 2 to 5 at schools across California to highlight the relationship of racist mass incarceration to the privatization of education. Thousands of people in Santa Cruz were affected on March 3 when six students locked themselves together to block highway traffic.

Student protests have been held regularly at UC Santa Cruz since November of 2014, when the University of California Regents voted to increase tuition by more than 25% over the next five years.

Organizers described the purpose of the 96 Hours of Action in an event announcement: "This is a call to action for students of all Universities, Community Colleges, High Schools, Middle Schools past, present, and future to stand up for free public education and shut down the racist, classist, corporate, militarized police state. The same people benefiting from racial oppression are the same people benefiting from education debts. The state of California is failing its people by investing in police and prisons instead of public education. It's time to reject this assault on our communities and stand together for education and the end of police violence....Stand with your California's students to demand a free, non-oppressive, non-corporate education. We call upon your collective voices and bodies to end this state-sponsored violence against black and brown individuals, end this war against low-income communities, shut down the school-to-prison pipeline, and prioritize PEOPLE OVER PROFITS! STUDENTS OVER SUITS!"

See Also: An Open Letter about Student Protests at UCSC