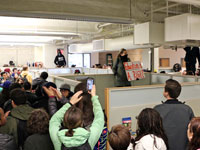 On November 20, students at UC Santa Cruz occupied the Humanities and Social Sciences building and plan to stay inside until the UC Regents roll back the tuition increases they approved this week. Student fees across the University of California system will raise by at least 5% a year for the next five years if the Regents' plan is instituted.

Occupy Our Education writes: "The University of California was once a tuition-free and public institution. Now the students are facing yet another tuition hike. The most recent attempt to raise tuition in 2009 was successfully frozen by the courageous and necessary action of students, yet this week, the UC Regents have approved a 5% tuition increase each year for the next five years. This is in addition to the numerous increases that have occurred since the new millennium which amount to what will now be a 500% increase by 2020. Governors and legislatures have come and gone, and have continually spouted rhetoric without taking any action."

"In addition to tuition increases, students face larger class sizes, fewer classes, cuts to student services, and ultimately, are paying more for less education. Of course, these measures disproportionately affects those already marginalized--women, students of color, queer students, and many more. A private business parades in the mask of a public university."