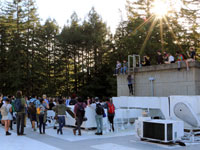 In a continued series of actions to oppose the tuition hikes approved by the University of California Regents in November, students at UC Santa Cruz left their classes on December 8 and marched around campus and to the administration building. Some administrators and staff scurried out of Clark Kerr Hall as hundreds of students marched through the building; others stayed in their offices as the demonstrators walked by, pounding on the hallway walls. Many students also stopped to pound at the door of the office of the Chancellor, which is locked and fortress-like. Eventually a group rallied on the roof of the building and an open mic was held.

The student walkout at UCSC was the first major action held on campus to oppose the tuition increase since the six-day occupation of the Humanities 2 building ended the day before Thanksgiving vacation. Since returning from vacation, students have been organizing and have decided against making further demands of the UC administration. As an alternative to a list of demands, they have penned a "pledge to act" against the tuition hikes.