Add an Event
Newswire
Calendar
Features
Home
Donate
From the Open-Publishing Calendar
From the Open-Publishing Newswire
Indybay Feature
Publish to Newswire
Add an Event
Related Categories: Santa Cruz Indymedia | Education & Student Activism
UCSC Student Walkout Ends with Rally on Roof of Administration Building
by Alex Darocy (alex [at] alexdarocy.com)
Tuesday Dec 9th, 2014 3:18 PM
In a continued series of actions to oppose the tuition hikes approved by the University of California Regents in November, students at UC Santa Cruz left their classes on December 8 and marched around campus and to the administration building. Some administrators and staff scurried out of Clark Kerr Hall as hundreds of students marched through the building; others stayed in their offices as the demonstrators walked by, pounding on the hallway walls. Many students also stopped to pound at the door of the office of the Chancellor, which is locked and fortress-like. Eventually a group rallied on the roof of the building and an open mic was held. [Top photo: Students hold a rally on the roof of Kerr Hall. Scroll down for video and more photos.] 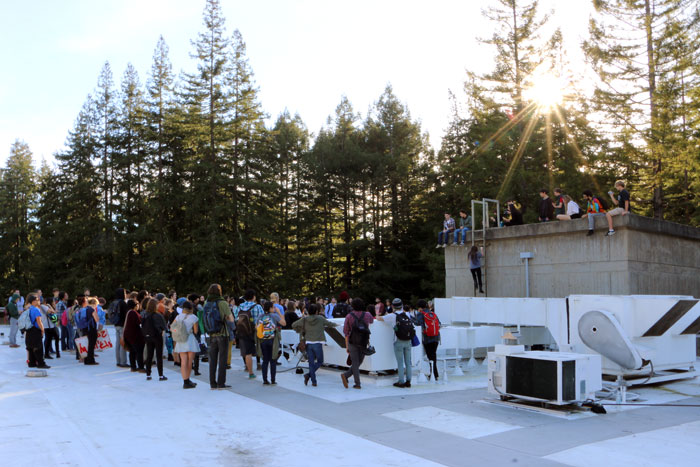 The student walkout at UCSC was the first major action held on campus to oppose the tuition increase since the six-day occupation of the Humanities 2 building ended the day before Thanksgiving vacation. Since returning from vacation, students have been organizing and have decided against making further demands of the UC administration. As an alternative to a list of demands, they have penned a "pledge to act" against the tuition hikes.

Demonstrators printed up copies of the pledge as flyers and attached them in various locations in and outside of Kerr Hall. The flyer cautions administrations to "expect us," stating that over 1000 students and community members have pledged to "take necessary action" to fight the tuition hikes.

Full text of the pledge:

We Are Not Asking: A Pledge to Act Against Tuition Hikes

Given what we know about the University of California, it would be pointless to ask anything of our administrators. They will not answer to us. They answer only to the UC Regents—an unelected group of financiers, CEOs, and corporate attorneys. The Regents act only in their own self-interest and answer to no one; they attack workers with impunity and cut student services, all while driving us more deeply into debt.

We recognize that a university run by the few will never willingly work for the many different students, workers, and community members who compose it.

We recognize that the Regents and administration are already aware of the position of UC students: No tuition hikes!

For these reasons, we reject the tuition hike plan and pledge to take the necessary actions to prevent its implementation. We will act ceaselessly until we realize our vision of a maximally accessible university that answers to the demands of students, workers, and teachers that are this university.

The pledge can be signed online at:
https://www.change.org/p/chancellor-george-blumenthal-we-re-not-asking-a-pledge-to-act-against-tuition-hikes 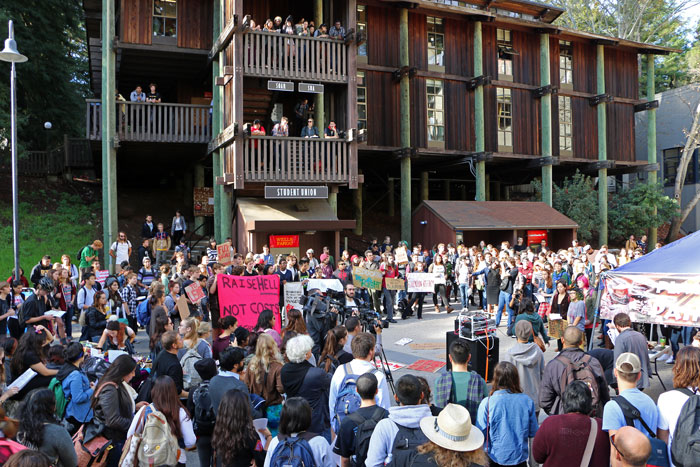 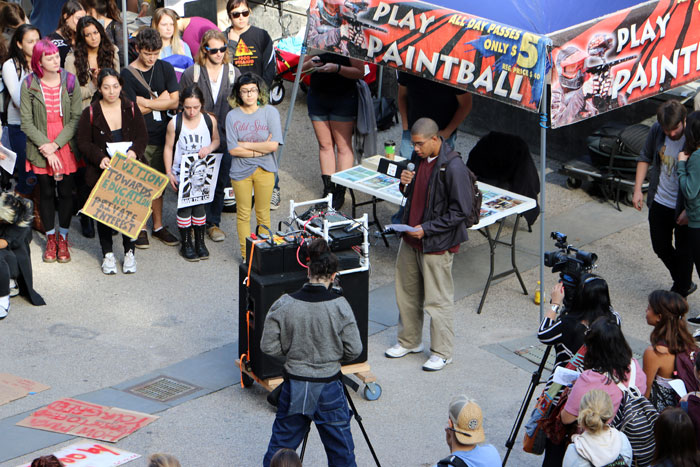 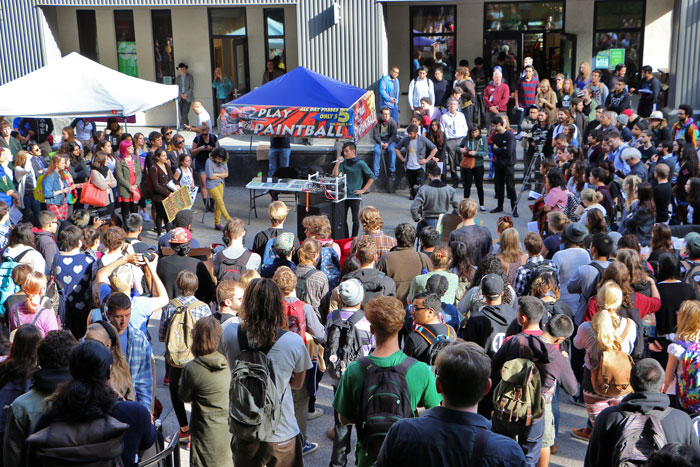 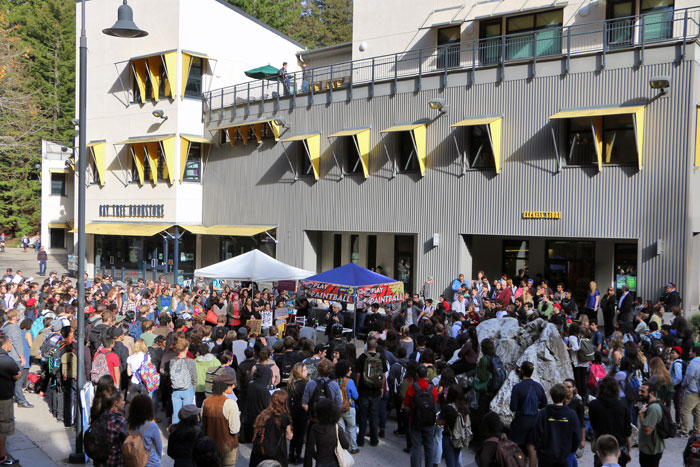 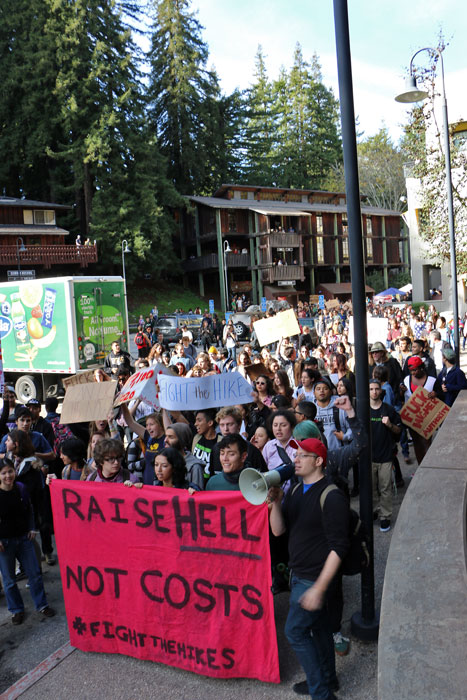 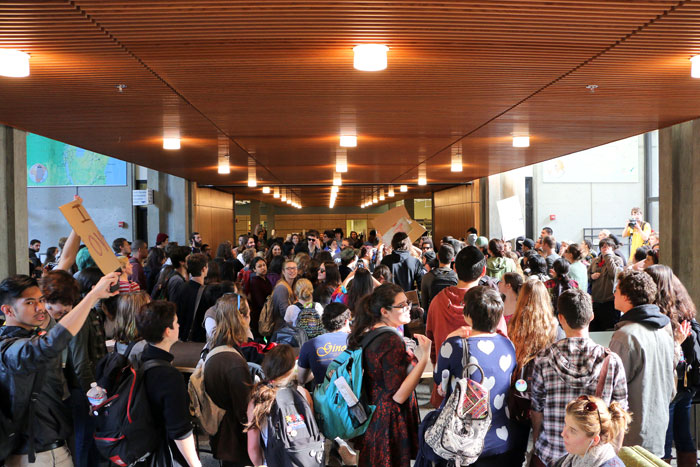 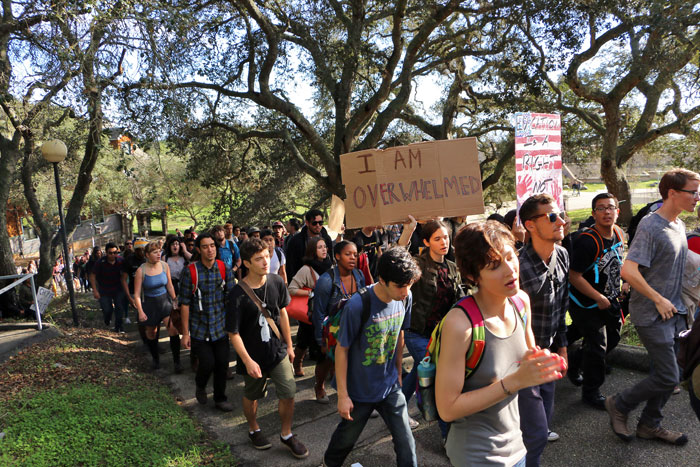 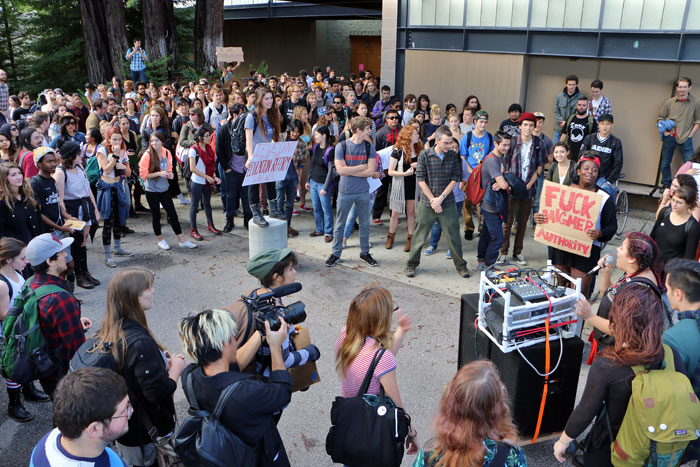 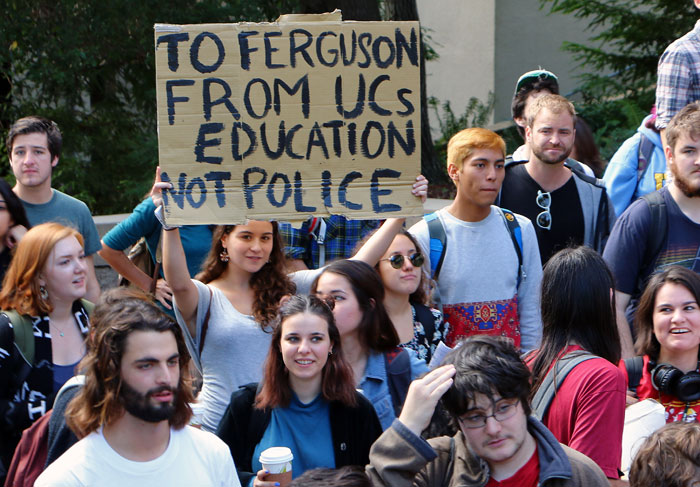 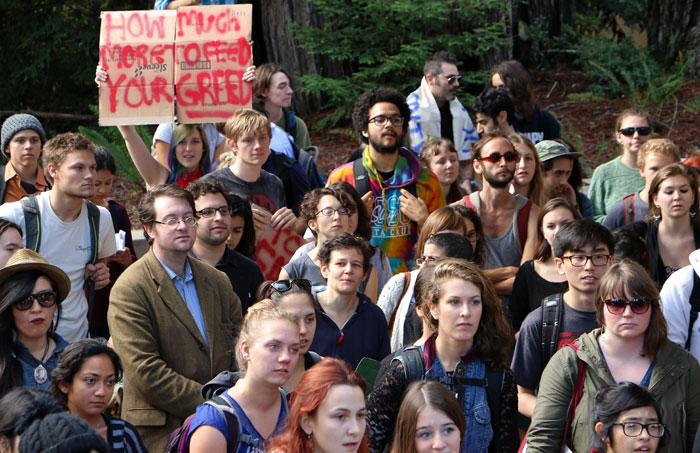 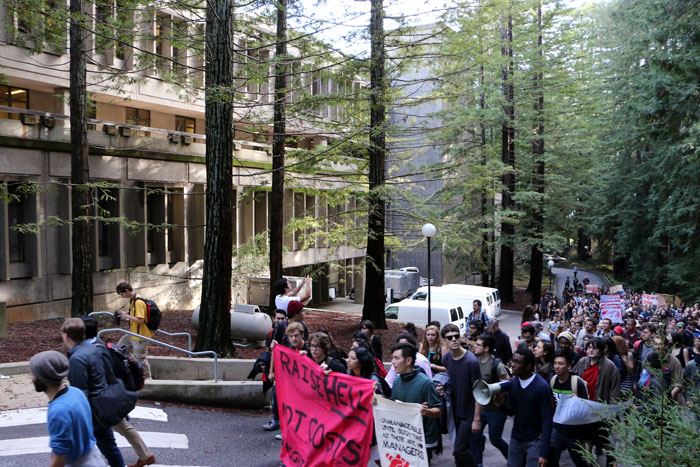 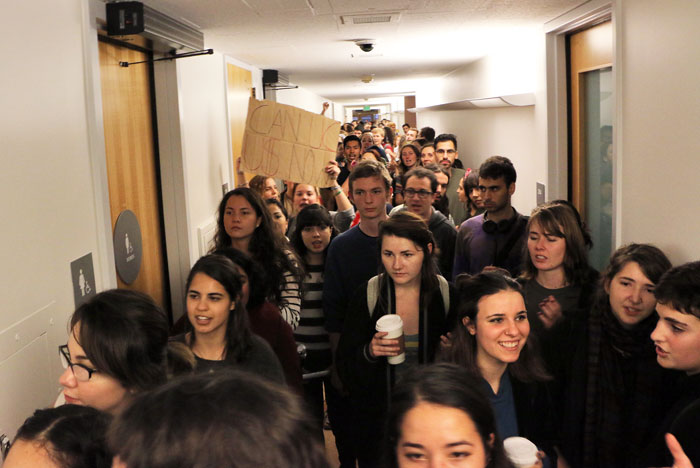 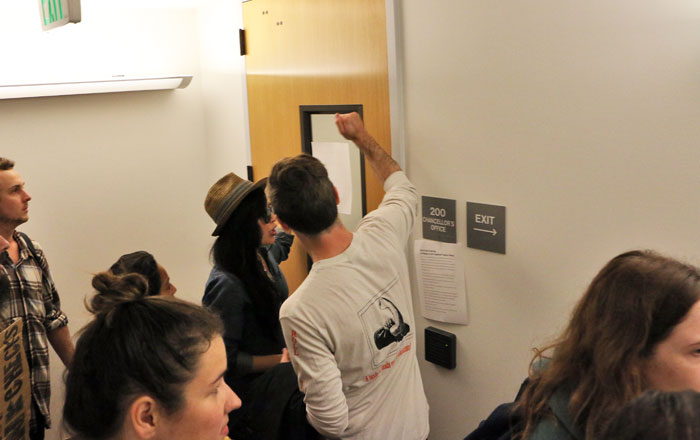 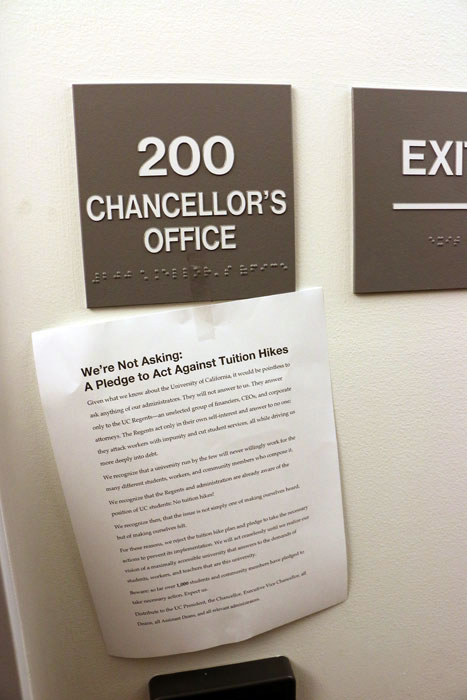 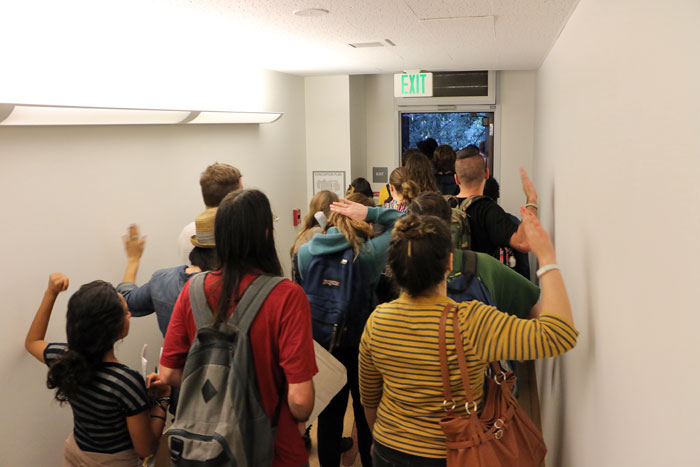 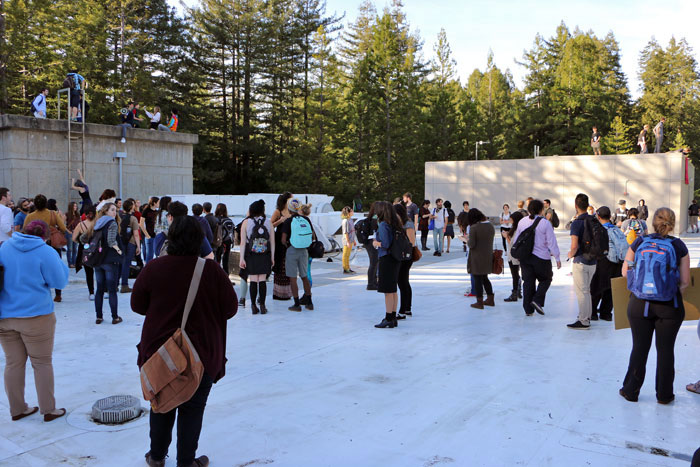 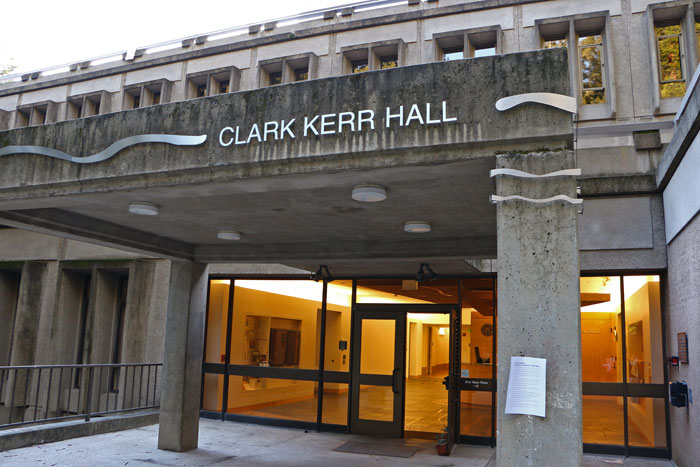 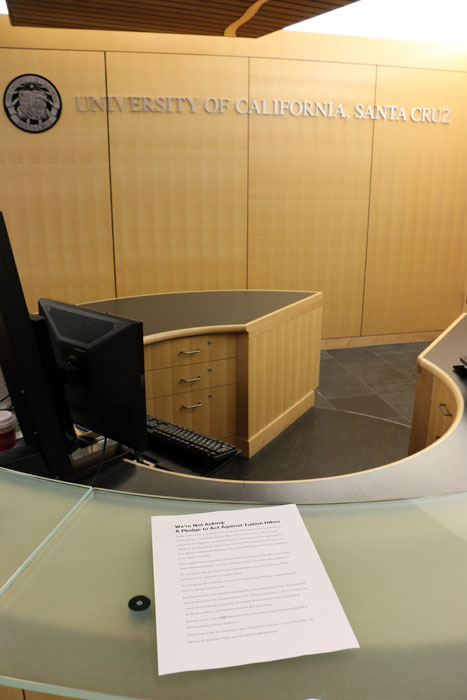 §Conference Room. We Are Not Asking: A Pledge to Act Against Tuition Hikes
by Alex Darocy Tuesday Dec 9th, 2014 3:20 PM 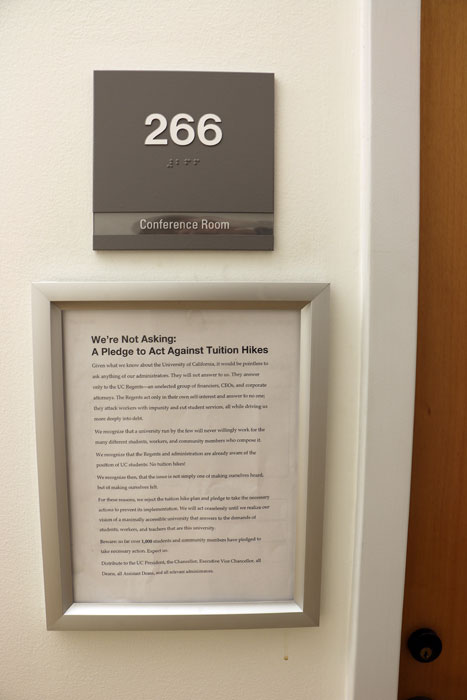 We Are Not Asking: A Pledge to Act Against Tuition Hikes
§Kerr Hall Lobby: To Learn
by Alex Darocy Tuesday Dec 9th, 2014 3:22 PM 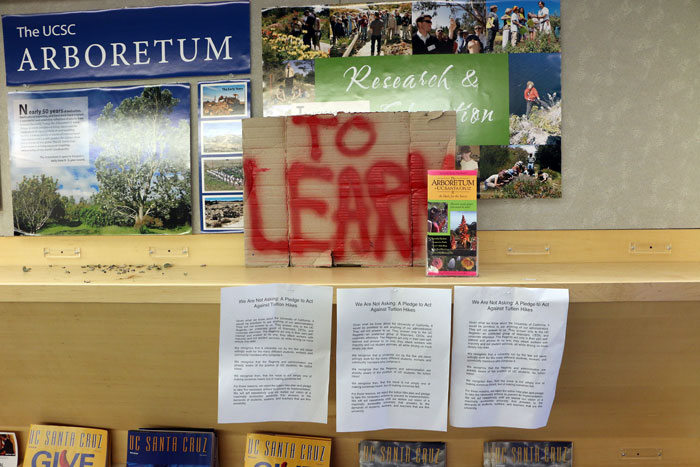 We Are Not Asking: A Pledge to Act Against Tuition Hikes
§"I'm tired of living in a state that would rather give sentences than degrees"
by Alex Darocy Tuesday Dec 9th, 2014 3:23 PM 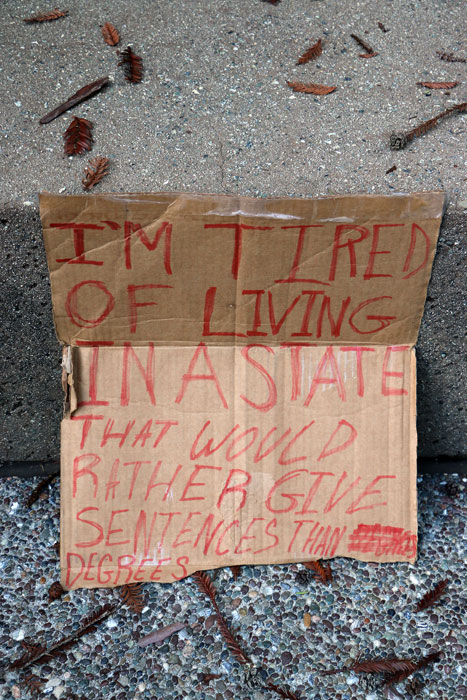 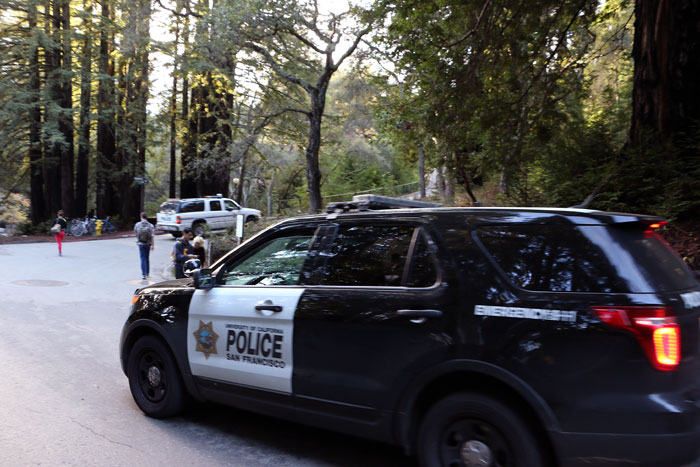 After demonstrators left Kerr Hall, two trucks full of UC police drove up.
Add Your Comments
Support Independent Media
We are 100% volunteer and depend on your participation to sustain our efforts!