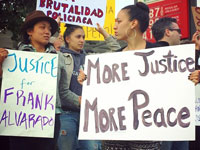 In response to the killing of Frank Alvarado, the Direct Action Monterey Network called for a rally on July 12 at the corner of South Sanborn Rd. and Fairview Ave. in East Salinas against police violence. Frank's sister Angélica Garza spoke, saying she wanted justice for "Frankie" and "he had a big heart." For the duration of the rally, Frank's niece held a sign that read "Stop Police Brutality. Justice For My Uncle!"

Frank's niece Natalie Mendoza also spoke at the rally, as did Courtney Hanson and Tash Nguyen of Sin Barras, a prison abolition group based in Santa Cruz, of which Frank was a member. "Frank was an extraordinary person with a big and loving heart," Sin Barras has stated. "His contagious spirit, candid perspective, resilience, and compassion for those who are struggling inspired community-building and understanding around him."

Natalie was calm, sad, well-spoken, and angry when she spoke. She righteously proclaimed, "It's not right. I've never had this much hate in my life for anything else. I'm sad, but I'm more angry than anything else because of how he was gunned down. There was no reason for how he was killed; no way to justify their actions. He wasn't even armed. We just need justice for him, and everybody else, all the other cases that have gone like this. There needs to be justice, and SPD needs to have a taste of their own medicine."

Read More with Photos and Video |