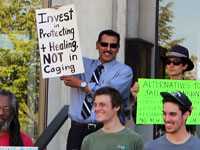 On July 10 at around 5am, two officers with the Salinas Police Department shot and killed Frank Alvarado at a private home in Salinas. Frank was well known in Santa Cruz, where he recently spoke out against California prison expansion at a rally in May. His killing was the fourth use of lethal force since March 21 by officers with the SPD, and all of the killings have occurred in East Salinas neighborhoods.

At the May 14 rally in Santa Cruz, Frank spoke about prison reform. The rally was organized for community members to voice their opposition to the Governor's May revise budget, which called for an increase in spending for jail and prison expansion. Frank spoke strongly about the importance of budgeting state money for social programs instead of prison expansion, and he shared his personal experience of incarceration, describing his release from prison in July of 2013. He cautioned that building more prisons at the sacrifice of schools and parks would lead to devastating results for California. "You will have your hell if you build those prisons," he said.

Community members have gathered in the Salinas neighborhood where Frank was killed on July 10 and 11 to protest his and the other three SPD killings, and a rally has been planned for Saturday, July 12 at 6pm at the intersection of Fairview Avenue and Sanborn Road in Salinas.