Add an Event
Newswire
Calendar
Features
Home
Donate
From the Open-Publishing Calendar
From the Open-Publishing Newswire
Indybay Feature
Publish to Newswire
Add an Event
Related Categories: Santa Cruz Indymedia | Police State & Prisons
Salinas Police Silent After Fourth Officer Involved Killing
by Monterey County Police News
Thursday Jul 10th, 2014 12:41 PM
A man shot by Salinas Police this morning, July 10, at around 5am, died. Frank Alvarado, 40, was killed in this morning's officer involved shooting, which occurred in East Salinas at Beverly Drive and Fairview Avenue. This is the fourth officer involved killing by the Salinas Police Department in 2014.
Chief McMillin of the Salinas Police Department isn't releasing any information about the killing and is leaving that to the Monterey County District Attorney.

"Salinas Police Officers were involved in a shooting this morning at about 5:00AM. Chief McMillin has requested that the Monterey County District Attorney investigate this shooting. Any questions regarding the shooting should be directed to District Attorney Dean Flippo at 831-755-5470.

"Chief McMillin will be available to answer questions regarding this process this morning, July 10 at 11:00AM in the City Hall Rotunda."

"UPDATE (12:50pm): District Attorney Dean Flippo identified the man as Frank Alvarado, who was 39 or 40 years old. Flippo said officers responded to a civilian calling in a complaint, though he was unable to provide details as to the nature of the complaint or the subsequent deadly encounter."

"Flippo couldn’t say whether Alvarado, who is either 39 or 40 years old, was armed or what he was doing." 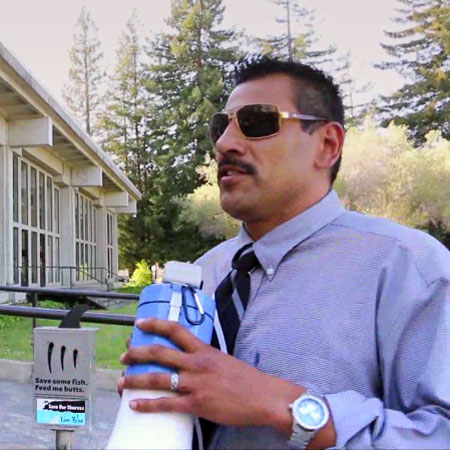 Frank Alvarado speaking in Santa Cruz on May 14, 2014. Screenshot from video by Alex Darocy.

Increases in Prison and Jail Spending in Governor's Revised Budget Opposed in Santa Cruz
by Alex Darocy
Thursday May 15th, 2014

Residents and representatives of community organizations in Santa Cruz rallied outside of the court house on May 14 to voice their strong opposition to the Governor's May revise budget, which calls for an increase in spending for jail and prison expansion. According to Californians United for A Responsible Budget (CURB), spending on corrections in the state will rise 2.9%, and total spending on prisons will top $12 billion if the budget revision is adopted. Similar rallies were also held in San Francisco, Bakersfield, Los Angeles, San Bernardino, and San Diego.

[S]peaking at the rally was Frank Alvarado, a former inmate who described making it through eleven years of "hell" while incarcerated. He cautioned that building more prisons at the sacrifice of schools and parks would lead to devastating results for California.

"You will have your hell if you build those prisons," he said.

https://www.indybay.org/newsitems/2014/05/15/18755833.php
§DA provides details today: Two officers fired
by via Monterey County Weekly Friday Jul 11th, 2014 5:34 PM
Monterey County District Attorney Flippo provided details of the killing today. Salinas Police say they received a report Alvarado was threatening his family in an attempt to "commit suicide by cop". They were also made aware over an emergency call that Alvarado was on meth and that he was threatening to "commit suicide by cop" by holding a cell phone like it was a gun. When they arrived he did that and police say two officers fired, finding the cell phone after shooting him.

From the Monterey County Weekly:

"Two officers fired, and Alvarado was transported to Natividad Medical Center, where he died."

"Flippo said he is not aware of any non-lethal attempts to stop Alvarado other than verbal command."

http://www.montereycountyweekly.com/blogs/news_blog/first-details-emerge-about-the-salinas-police-shooting-death-of/article_b0a2eb5a-094f-11e4-a14c-001a4bcf6878.html
Add Your Comments
LATEST COMMENTS ABOUT THIS ARTICLE
Listed below are the latest comments about this post.
These comments are submitted anonymously by website visitors.