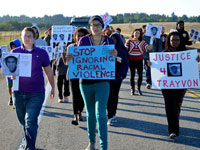 Following the acquittal of Trayvon Martin's killer, George Zimmerman, on July 13, hundreds took to the streets in Napa, Oakland, Sacramento, San Francsisco, San Jose, and Santa Cruz. At rallies, candle light vigils, and marches, community members have called for justice for Trayvon and an end to the racial profiling and police abuses that occur on a day-to-day basis across the country.

After the verdict was handed down, emergency protests were organized in San Francisco and Oakland, bringing out hundreds for rallies and marches. Over the course of the week, protests heated up in Oakland where demonstrators blocked intersections and freeways, and building windows were smashed throughout downtown.

Solidarity vigils in San Jose and Santa Cruz were organized by university student groups, and Al Sharpton's National Action Network organized actions in over 130 cities across the country on July 20 to demand that the U.S. Department of Justice prosecute George Zimmerman for violating Trayvon Martin's civil rights.

Trayvon Martin Rally in the 'Hood (7/27) | Another response to "A Basic Explanation of Recent Events in Bay Area" Article | The Outside Agitator & White Vigilantism: A Reportback From Oakland | Statement from Hannibal Shakur on Felony Vandalism & the Murder of Black Boys |

Oakland Rising! All Out for Trayvon and against Police Violence (7/14) |

We Are All Trayvon! Justice for Trayvon Martin! Vigils (7/12)

The Justice for Trayvon Martin Movement Grows in San Jose (part 2, photos from 7/21) |

The Justice for Trayvon Martin Movement Grows in San Jose |

NAACP Releases 'Trayvon's Law' Principles for State Legislative Advocacy | No Justice, No Juice! Boycott Florida Agriculture - Demand Justice for Trayvon Petition | #BLOCK4TRAYVON ~ A Proposal to Block Everything | UC Student-Workers Union Statement of Solidarity with the Justice for Trayvon Martin Movement | ILWU Local 10 Pledges Support For Trayvon Martin Actions | Racist and Deracinated: Towards a More Inclusive White Supremacy | Zimmerman’s Acquittal and the Call for a New Civil Rights Movement | NAACP Statement in the Acquittal of Gorge Zimmerman in the Killing of Trayvon Martin |

Attorney John Burris on how prosecutors failed to win a conviction of George Zimmerman | Justice for Trayvon Martin! There is No Justice in The Capitalist Courts! | Zimmerman: Not Guilty of Cold-Blooded Murder