Add an Event
Newswire
Calendar
Features
Home
Donate
From the Open-Publishing Calendar
From the Open-Publishing Newswire
Indybay Feature
Publish to Newswire
Add an Event
Related Categories: East Bay | Racial Justice
Oakland Rising! All Out for Trayvon and against Police Violence
by JP Massar
Sunday Jul 14th, 2013 10:59 PM
No Oakland march would be, well, an Oakland march without FTP (File Transfer Protocol, for you non-nerds) banners and slogans.  If it happens to also be in support of a dead young man killed by a racist vigilante, well, all the better. 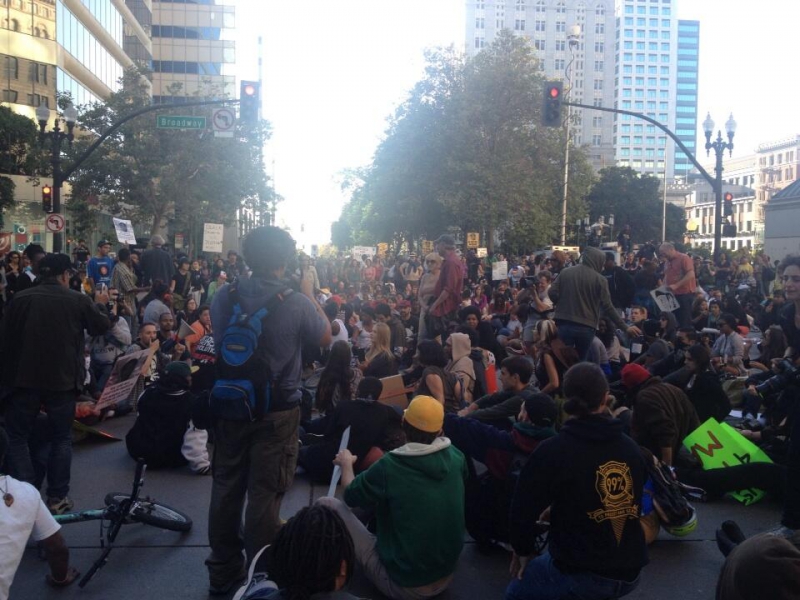 Six hundred people left Oscar Grant Plaza at 5:00 PM this evening after a rally in the plaza that began at 4:00 PM. Taking over the streets they marched into West Oakland (home of the 60's Black Panther party), gathering people as the march progressed.  It is not implausible that over a thousand people returned to Oscar Grant Plaza as the march ended. Yet the day's activity had not.

Hundreds then decided to block downtown Oakland's main intersection at 14th & Broadway (right off Oscar Grant Plaza), lying down in the street in symbolic affinity to the sprawled corpse of Trayvon. The blockade has continued for some three hours.

Here is the Trayvon's legacy as told in Oakland today in tweets and pictures.

Nothing in Oakland starts on time, and therefore no one shows up on time, but by 4:00 PM, the nominal start of the rally, there were already over 200 people in the Plaza by my count, portending a soon-to-be wall-to-wall people gathering.

Six hundred people marched out of the plaza, with some staying behind, so the rally itself had more than six hundred attendees.

Just starting out down Broadway.

And then heading towards West Oakland.

Solid block of people! What do we want? justice! when do we want it? now pic.twitter.com/7mPDV0kcm1

waiting for comrades and heading to West Oakland when they catch up pic.twitter.com/MnLKPPT690

"Welcome to #Oakland" a protestor said to motorist who had to stop as hundreds marched by @insidebayarea pic.twitter.com/18fn2rfdTk

A new and invigorating chant.

Some observations by marchers and onlookers.

Media is weeping over a broken windshield in #Oakland. Meanwhile, #TravyonMartin is still dead and his murderer walks free.

Until now I've only heard marchers refer to #TravonMartin & #OscarGrant. Now chanting about #AlanBlueford, who was killed by #OPD last year.

Hundreds marching in #Oakland in opposition to not guilty verdict #TravonMartin pic.twitter.com/y1mJ1fV9C9

Which act of utter disrespect will be the one that gets us all out? pic.twitter.com/LZs01CCKBi

Oakland is the most diverse city - and i would bet this is most diverse march- bart train honked as went by. hitting west oakland turned

I think he's exaggerating some, but the march definitely got significantly bigger over time.

opd's main job keep us docile! miserable failures! Ruling class we e coming 4 u the enpire is coning down pic.twitter.com/Y3mrYlfvi2

For some inexplicable reason five or six OPD marched right along, practically within, the march. I was off to the side once counting marchers and holding a WANTED poster for one of OPD's finest (Miguel Masso, who shot and killed Alan Blueford) and they trod right past me, within a foot or two, right in the middle of the protesters.

Well, all they got for their trouble was listening to such as this for miles:

"no justice no peace, no racist police"

We r all Trayvon Martin-people respond cheering like the did when we marched back from portshutdown first time pic.twitter.com/hMJtgGYsld

The march went all the way to the West Oakland Bart Station, then up to Little Bobby Hutton Park, then straight back to Oscar Grant Plaza.

We are marching past little Bobby Hutton park, lots of people happy to see us

Back at the Plaza, and deciding to take the intersection.

.Lie in 4 all young black men they r killing- we r holding intersection for them pic.twitter.com/MeDlkH9Mvn

We have taken the intersection of 14th and Broadway

The march is back home now. Trayvon, we're on our minds. pic.twitter.com/Kfq4cRJVky

"We went through the ghetto and people came outside and were embracing the positive message. We can do that every day" Oakland rally speaker

i love oakland and most of the eastbay pic.twitter.com/vYerVy1Xob

Just got back to OGP. Still about 100 people holding the intersection. Talk of a march at 10. #Oakland #JusticeForTrayvon #YAN

And let's do it again tomorrow!!!

"This was an overwhelming success. There's going to be another rally tomorrow at Oscar Grant Plaza. 6pm."

Now for some things completely different.

#JusticeForTrayvon RT @megmulsy: This is the most eloquent response to the #zimmerman acquittal I've seen so far pic.twitter.com/WZOB5FF9Jk

don't like him but us awesome pic@NicholsUprising: Remarkable image of the huge #JusticeForTrayvon rally in NYC... pic.twitter.com/gsBLCWLioG

http://www.dailykos.com/story/2013/07/15/1...
Add Your Comments
LATEST COMMENTS ABOUT THIS ARTICLE
Listed below are the latest comments about this post.
These comments are submitted anonymously by website visitors.