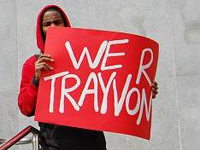 On February 26th, 17-year-old Trayvon Martin was shot dead by self-styled vigilante George Zimmerman in Sandford, Florida. Sanford police did not arrest Zimmerman for killing the unarmed teenager, nor even take physical evidence such as Zimmerman's clothing or the handgun he used that night. Police allowed Zimmerman to walk away without charges under the protection of Florida's "Stand Your Ground" law. Calls made to 911 by Zimmerman reveal him to be obsessed with young African American males, stating "these assholes always get away." A possible racial epithet can be heard in an enhanced-audio version of the calls.

Rallies and marches have been held across the country for Trayvon, including in the Bay Area. On March 21st, as part of the nationwide "1 Million Hoodies" march, hundreds rallied at Bradley Manning Plaza and marched in San Francisco. On March 26th, the one month anniversary of the killing of Trayvon, rallies were held on the steps of San Francisco's Hall of Justice and in Oakland at Oscar Grant Plaza.