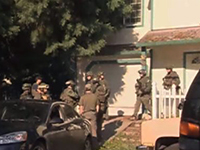 On July 25th, multiple homes were raided and grand jury subpoenas issued in Portland, Olympia, and Seattle. Three homes were raided in Portland, by approximately 60-80 police, including FBI and Joint Terrorism Task Force. Individuals at the homes say police used flash grenades during the raid. Grand jury subpoenas have been served to individuals in all three cities: two in Olympia, one in Seattle, and two in Portland. The grand jury is scheduled to convene on August 2nd at the federal courthouse in Seattle. No arrests have been made.

Electronics were confiscated along with additional personal items. All legal documents related to the searches and grand jury are sealed, and the FBI will only say it is related to an “ongoing violent crime” investigation. But based on interviews with residents, and what police told them at the scene, the raids appear related to an ongoing demonization of anarchists and the Occupy movement, as evidenced by authorities being in search of “anti-government or anarchist literature.” In addition to the anarchist literature, the warrants also authorize agents to seize flags, flag-making material, cell phones, hard drives, address books, and black clothing. Will Potter of Green Is the New Red speculates that the "listing of black clothing and flags, along with comments made by police, indicates that the FBI may ostensibly be investigating 'black bloc' tactics used during May Day protests in Seattle, which destroyed corporate property."

In the Bay Area, solidarity actions have included banner drops and the vandalism of police cars and stations.