by Will Potter, Green Is the New Red
When FBI and Joint Terrorism Task Force agents raided multiple activist homes in the Northwest last week, they were in search of “anti-government or anarchist literature.” 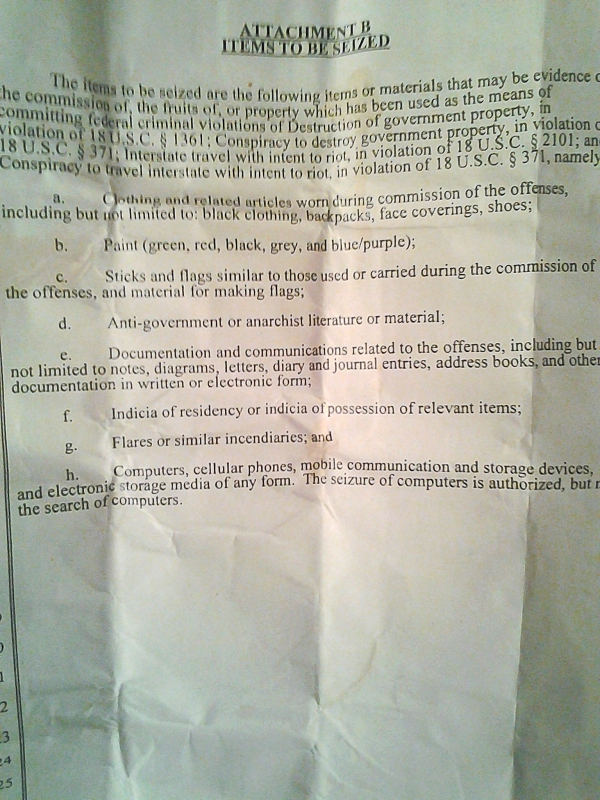 The raids were part of a multi-state operation that targeted activists in Portland, Olympia, and Seattle. At least three people were served subpoenas to appear before a federal grand jury on August 2nd in Seattle.

The listing of black clothing and flags, along with comments made by police, indicates that the FBI may ostensibly be investigating “black bloc” tactics used during May Day protests in Seattle, which destroyed corporate property.

If that is true, how are books and literature evidence of criminal activity?

To answer that, we need to look at the increasing harassment, surveillance, and prosecution of anarchists and political activists associated with the Occupy Movement.

In some cases, such as the May Day arrests in Cleveland, the FBI has been so desperate to arrests “anarchist terrorists” that it supplied them with bomb-making materials and used an informant to entrap them. The same thing happened in Chicago.

The motivation for these operations, and the instruction that “anarchist” means “terrorist,” is coming straight from the top levels of the federal government. As I recently wrote, new documents show that the FBI is conducting “domestic terrorism” training presentations about anarchists.

The FBI presentation described anarchists as “criminals seeking an ideology to justify their activities.”

This is the guilt-by-association mentality that is guiding FBI and JTTF assaults on political activists; if agents find “anarchist literature” in a raid, it is evidence of criminal activity because anarchism, in and of itself, is criminal activity.

The Seattle grand jury may or may not be investigating May Day protests. What’s clear, though, is that the grand jury is being used as a tool in this criminalization of those suspected as “anarchists.” Grand juries are secretive processes that are frequently used against political activists in order to acquire information. They are fishing expeditions. If activists refuse to testify about their personal beliefs and political associations, they can be imprisoned. Jordan Halliday, for example, was recently released after serving more than six months in prison (and being imprisoned once already for four months) for asserting his First Amendment and Fifth Amendment rights and refusing to provide information about the animal rights movement.

As one organizer with Occupy Seattle said after the raid: “…we are not being raided for connection to any crime, but to some political ideology that the police think we have.

“I was just doing research on the old Pinkerton strikebreaking paramilitaries, so it’s kind of funny, you know, to have that old Red Scare history burst through my front door at six AM.”

END_OF_DOCUMENT_TOKEN_TO_BE_REPLACED
Add Your Comments
Latest Comments
Listed below are the latest comments about this post.
These comments are submitted anonymously by website visitors.
TITLE
AUTHOR
DATE
Patrick Kelley
Patrick Kelley
Seattle federal building?
cp
Support Independent Media
We are 100% volunteer and depend on your participation to sustain our efforts!