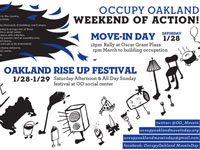 At the last General Assembly of 2011, Occupy Oakland decided to take over a large vacant building with the purpose of putting it to the use of the people of Oakland. The Move-In Assembly met twice a week to plan the move in. The new social center was intended to be launched with a two day Oakland Rise Up Festival packed with speakers, workshops and performances.

Occupy Oakland met as planned at Oscar Grant Plaza at 1pm on Saturday, January 28th and marched to the building that was to be reclaimed for the movement. The Move-In Assembly explained previously: "Occupy Oakland has a demonstrated need for such a space. We have served tens of thousands of meals without charge, provided a place for thousands of people to sleep free from police repression, planned and carried out actions in which tens of thousands of people have participated. Most importantly, unlike a charity, Occupy Oakland provides people with the opportunity to get involved and determine the direction of the movement. It is open to the initiative of everyone."

As the intended target for occupation came into sight, the abandoned Henry J. Kaiser Convention Center, Oakland police formed lines of riot police armed with projectile weapons and tear gas on perimeter streets and around the building. Tear gas was fired at marchers in front of the convention center, and again in large amounts along with projectiles around the corner at 10th and Oak streets. Marchers headed back to Oscar Grant plaza to recover from the police attacks and then a new march headed through downtown Oakland, presumably to find an alternative building to claim as community space. Police kettled marchers in the Uptown Apartments park on Telegraph, and then again on Broadway in front of the YMCA. At the YMCA, hundreds were arrested, including several independent journalists. Many of those not kettled then marched back to the plaza where a small group took a flag from inside of City Hall and burned it on the steps in front of the building to protest the mass arrest still on-going on Broadway.

Activists and Anarchists Speak for Themselves at Occupy Oakland |

Convergence Against State Repression of Occupy Oakland | Contact the Independent Monitor re OPD Riot on January 28, 2012 | A Call To Oakland's Non-Violent Movement: We Must Lead By Example |

Photos from J28 Move-in Day (Plan A) -- 1/2 | Jailed for Marching in Oakland: What it means for you and your children | YMCA, Autism, & Why Mental Health IS an Issue for Occupy | Nationwide Support for Occupy Oakland; Solidarity Demonstrations in Dozens of Cities | If you have been arrested at Occupy Oakland, please read the following | more jan 28 pix |

Oakland Photography Documentation | a letter from some friends in Oakland | Occupy Chicago Stands with Oakland! | What really happened at Occupy Oakland on Saturday January 28

Posters and Handbills | Call for Supplies

New Zine for Printing: 'Beyond A Critique of Non-Violence' | The Struggle for Leadership Within “Leaderless” Occupy |

Never have sex with police, especially from Oakland | UCB Occupation |

Inside Out | Occupy Oakland: An Urban Exhibition and an Inside Out Group Action |

Fuck the Police 7 | Hedging Our Bets on the Black Bloc: the Impotence of Mere Liberalism | Who is "Stand For Oakland"? - an info brief | Oakland police supports counterinsurgency group to oppose Occupy Oakland |