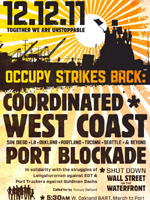 Community pickets and mass mobilizations to blockade ports have been planned for December 12th by Occupy movements in San Diego, LA, Oakland, Portland, Tacoma, Seattle, Vancouver, and Houston. Occupy Anchorage, Occupy Denver, and Occupy Wall Street are targeting Goldman Sachs and Walmart on the 12th. Solidarity actions are being planned as far away as in Japan. "Occupy Oakland called for this massive coordinated blockade as a way to strike back at the 1% after their attacks on the Occupy movement and their continued assault on working and poor people” said Boots Riley, an organizer with Occupy Oakland. ”Our action is aimed directly at Wall Street on the Waterfront and is in solidarity with the struggles of port workers in LA and Longview, WA.” Longeshoremen in Longview are currently in a bitter fight with the multinational grain exporter EGT, and port truckers in LA are fighting to unionize against Goldman Sachs-owned SSA.

Organizers of the port blockade see the actions planned for Monday as an important next step for Occupy. In recent weeks, Occupy activists across the country have expanded far beyond encampments and are now targeting large financial institutions, fighting foreclosures, reclaiming public space, and marching on valuable sources of profit for the 1%.