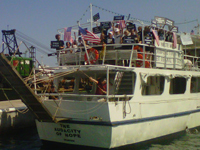 UPDATE July 19th: The MV Juliano was detained in Crete by Greek authorities who refuse to let the boat sail. The last remaining Flotilla II boat, the French boat Dignite/Al Karama, was stopped by the Israeli navy about 40 miles off of the coast of Gaza.

The 2011 Stay Human Freedom Flotilla has faced repeated threats and admonishments from the U.S. and Israeli governments, the early pullout of the Turkish contingent, meddling from Zionist law firms, sabotage to the propellers of the Irish and Greek-Swedish-Norwegian boats by underwater divers, and an order from the Greek government banning the flotilla from embarking on the journey to Gaza from Greece.

The "Freedom Flotilla 2 - Stay Human" was scheduled to depart by the end of June, but at this point, it remains uncertain how many boats will be able to leave the port of Athens and set sail for Gaza. Among the European, Australian, and North American ships that had intended to non-violently break the Israeli siege on the Gaza Strip was the U.S. boat The Audacity of Hope. On July 1st, The Audacity of Hope left port against the orders of the Greek government and was eventually turned back by the Greek Coast Guard, leading to the arrest of the boat's captain. A Canadian boat tried the same thing three days later and was likewise turned back by Greek military forces. One smaller French boat, the Dignité-Karama, was able to get out to sea the day after that.

Now, with the U.S. boat being held indefinitely at a Greek military port behind barbed wire, the Americans will not be able to sail with the Freedom Flotilla. The French boat that departed from Athens was detained and later released by the Greek Coast Guard in Crete. The Greek-Swedish-Norwegian boat MV Juliano has been repaired and is also at sea, currently being tracked by Greek helicopters.

Statements by and Interviews with U.S. Passengers:

Interview with Northern California Gaza Freedom Flotilla Passenger Henry Norr | This Is Not My Jerusalem - An Israeli American Explains Why She Will Be on the Flotilla | Alice Walker: Why I am sailing to Gaza on the Freedom Flotilla