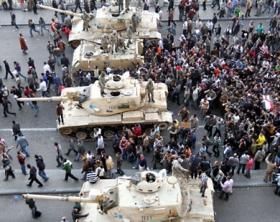 In a day of protests in Egypt, hundreds of thousands of people marched in the streets on January 25th facing down riot police, water cannons, baton charges and tear gas. The people are chanting for freedom and an end to the corrupt administration of Hosni Mubarak, who has been in power for 30 years, with the demand that he join the Tunisian dictator Ben Ali in Saudi Arabia.

By mid-afternoon, the Egyptian government had blocked Twitter, websites of independent newspapers and live streaming application #bambuser. There are reports that phone lines used by lawyers and activists providing support are also being suspended, and many phone lines have had data services disabled.

At least six protesters were killed with some reports that police in some cities used live ammunition on crowds. Over 1000 protesters have been arrested and Egyptian telecoms are attempting to block access to sites where protesters can post coverage.

While few people will openly admit to liking the dictatorship of Mubarak, he is one of the largest recipients of US aid and maintains his power largely because of the US backing. . In a January 27th PBS interview, Vice President Biden said he would not refer to Egyptian President Mubarak as a dictator and instead called him an “ally” on a number of key foreign policy issues. Comments by Hillary Clinton on January 25th made clear that the Obama administration was reluctant to change its foreign policy stance. A writer on Bikyamasr notes:

For almost all observers, activists and on-the-ground demonstrators on Egypt’s streets on Tuesday, American Secretary of State Hillary Clinton’s comments showed where Washington stands. With the government, not those demanding an end to decades of oppression and injustice. She said in a statement issued by the State Department early Tuesday afternoon Washington time – as police in Egypt were beginning a final push of tear bombs, water cannons and rubber bullets to disperse thousands of protesters – that “our assessment is that the Egyptian government is stable and is looking for ways to respond to the legitimate needs and interests of the Egyptian people.”

On January 28th hundreds of thousands of protesters took to the streets again as the government cut access to internet and phone service for much of the country. By the evening many government buildings were on fire with many protesters dead and wounded from tear gas canisters and live ammunition. As the army took to the street, replacing the police, and initially not attacking protesters, many thought the revolution had achieved its goal but Mubarak appeared on state television in the early evening to say he had fired the rest of the government but intended to stay in power.

Smaller protests continued on the 29th, 30th and 31st. On February 1st, millions took to the streets of Cairo, Alexandria and other Egyptian cities to demand an end to the Mubarak regime. The protests were the largest ones in Egypt in recorded history. Mubarak responded that he will not run for re-election in September but demonstrators will not let him steal another rigged election for his military junta; a protest is scheduled for Friday February 4th to march on the Presidential Palace in Heliopolis and force a change in regime (although it is rumored that Mubarak is operating out of Sharm el-Sheikh now).

On Wednesday, January the 26th, there was a demonstration of solidarity with the Egyptian protests at Market and Montgomery in San Francisco, starting at 5pm.

On January 29th, hundreds again took to the streets in San Francisco to demand an end to the Mubarak regime in Egypt. Protesters gathered at noon near the Montgomery St BART station and rallied for an hour before marching to UN Plaza.
Report |