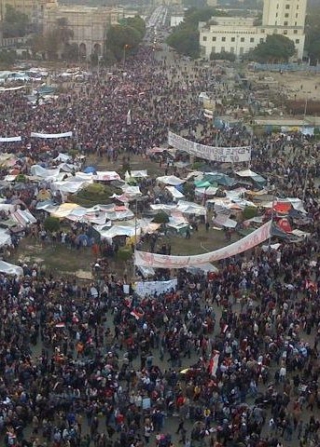 UPDATE: On February 11th, Mubarak resigned and passed control of the country to an Egyptian military council.

A new mass protest in Egypt took place Friday, February 4th as plain clothes police and other Mubarak supporters continued to attack protesters in Cairo's Tahrir Square. In the early morning hours of February 3rd, supporters of the regime opened fire on the protesters in the square, killing at least eleven.

The US and EU appear to be negotiating a transfer of power from Mubarak to Omar Suleiman, the former director of military intelligence. Suleiman is seen as a very close and trusted ally of President Mubarak, sharing many of his views on key issues such as Iran, Egyptian relations with Israel and the United States, and treatment of the Muslim Brotherhood. Suleiman has been implicated as directly involved in the CIA "rendition" program. Journalist Stephen Grey in his work, "Ghost Plane", states that after taking over as intelligence director, Suleiman oversaw an agreement with the US in 1995 that allowed for suspected militants to be secretly transferred to Egypt for questioning.

Demands of protesters in Tahrir Square are the following:
1) Bringing down the President
2) Dissolution of both houses of parliament
3) Immediate end to state of emergency
4) Formation of a transitional government of national unity
5) Elected parliament to undertake constitutional amendments to hold presidential elections
6) Immediate trials of those responsible for the murder of the revolution’s martyrs
7) Expedient trials of the corrupt and thieves of the country’s wealth

Poster in solidarity with Egyptian revolution

Earlier Indybay coverage of the protests