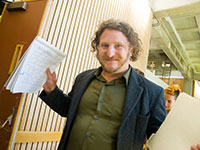 Wes Modes returned to Santa Cruz County Court on July 16th. This high-profile infraction case, claimed by supporters as harassment of Modes, a well-known anarchist activist, stems from his alleged participation in the Last Night DIY New Year's parade on December 31st, 2009, as well as a knowledge that the 2009 parade did not receive a permit. A ruling in the case is expected shortly after August 9th.

According to supporters, the parade infraction is the latest in a series of police harassment that Modes has received since outing police infiltrators in 2005. "Wes is being unjustly targeted for being an outspoken critic of the Santa Cruz Police Department. He's being singled out from a crowd of community organizers, facilitators and participants. It goes completely against the community spirit of this Santa Cruz celebration," said parade participant Grant Wilson.