According to supporters, the parade infraction is the latest in a series of police harassment that Wes has received since outing Santa Cruz police officers who infiltrated activist meetings in 2005. Longtime Santa Cruz resident and parade participant Grant Wilson stated that Wes, an outspoken critic of the Santa Cruz Police Department, is being unjustly targeted from a crowd of community organizers, facilitators and participants. Wes is apparently one of three people that were issued a citation for participating in the DIY Parade.

The July 16th hearing, originally scheduled at 1:30 in Dept. #2, was delayed and moved to Dept. #5, and eventually heard before Judge Jeff Almquist. Wes was represented in court by defense attorney Jonathan Gettleman. John Barisone argued the case for the city of Santa Cruz.

Each side called two witnesses to testify on the stand. Kathy Agnone, Special Event Permit Coordinator for the city of Santa Cruz testified on behalf of the city, as did SCPD officer Lauren Schonfield. Testifying on behalf of Wes were two parade participants, including Sherry Conable, an organizer of the Peace Walk which which led off the DIY Parade.

Approximately 30 people attended the hearing in support of Wes, and against what many people view as a clear case of selective enforcement. 30 people seems to be an impressive number of supporters to show up at a court hearing, however Wes has done so many positive things for the Santa Cruz community, therefore it would be more appropriate to have seen hundreds of people calling for the charge to be dropped due to selective enforcement. 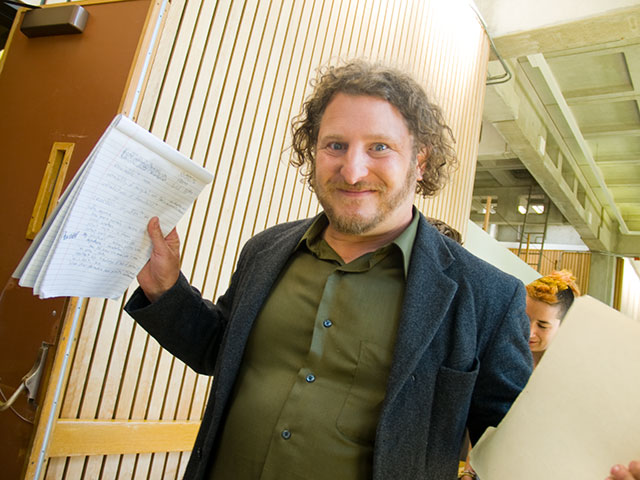 This upset the individual, who contemplated what to do, and ultimately decided to walk back into the court. Neither Officer Schonfield nor the Sheriff made any move to kick the person out of court a second time. It should be noted that the individual did not disturb the court, and was not kicked out by Judge Almquist.

Back inside the courtroom, it was difficult at times to hear clearly what was being said. If the sound was amplified, it was not loud enough, therefore I did not hear everything. That said, the following are my notes from the trial.

Apparently Kathy was sending emails to an account that was used by numerous people and associated with the DIY Parade website, lastnightdiy.org, and the emails she received did not have a name in them.

Officer Schonfield was on duty on the night of December 31st, 2009 in downtown Santa Cruz. She stated that the DIY Parade caused numerous problems, including traffic, safety, and lots of people downtown without enough law enforcement officers. Officer Schonfield learned of complaints that people had a hard time getting into their car and driving down Pacific Ave.

She saw Mr. Modes around 6pm getting dressed in the Saturn Cafe / Kinko's parking lot [Pacific Ave. and Spruce St.]

After the parade ended, Wes was eating dinner at Taqueria Los Pericos [Water St. and River St]. Officer Schonfield and SCPD Sgt. Michael Harms entered after Wes, and then asked to share the table with him. Wes allowed them to share the table and spoke to them about the night's events. During the conversation, Wes stated that he participated in the parade as part of the Balinese Gamelan musical group.

Sgt. Harms asked Officer Schonfield to document people in the parade. Harms did not specify to Schonfield that she should document any particular kind of people or group.

Whitney Wilde approached a police car driven by Sgt. Harms and spoke to him through the window. Officer Schonfield was also in the car. She previously did not know who Whitney Wilde was.

Sgt. Harms and Officer Schonfield had decided in a private conversation that it would not be safe to issue citations during the parade.

Officer Schonfield stated that participation in the parade meant being in the street.

Officer Schonfield was able to recognize and identify three parade participants: Wes Modes, Whitney Wilde, and Curtis Reliford who allegedly drove a truck with amplified sound as part of the parade.

Officer Schonfield stated that she did recognize Robert Norse on the night of the parade, but saw him outside of Bookshop Santa Cruz.

Officer Schonfield recognized Wes from a drum circle at the Santa Cruz farmer's market on September 17, 2008. Wes was arrested that day and received an injury to his leg in the process. Wes was taken to a hospital and Officer Schonfield sat with Wes as he waited to see a doctor. From that time spent with Wes, she decided that it would not have been safe to ticket him on the night of December 31st, 2009.

* Defense Attorney Jonathan Gettleman makes a motion to have the case dismissed because the city failed to prove that Wes knew that the 2009 parade did not have a permit. Judge Almquist denied the motion stating that since Wes had been involved in organizing the parade in previous years, he knew that part of the point of the parade was to protest against needing a permit.

* Testimony of Sherry Conable, parade participant and organizer of the Peace Walk

Sherry participated in the 2009 parade and had contact with the police during the parade.

Sherry learned of Wes receiving a citation for his participation in the parade. In response, she contacted numerous people working for the city, including John Barisone, asking that the charges against Wes be dropped for selective enforcement, or that she receive a citation as well, since she was also a participant.

She did not receive a response to the email, or a citation.

* Testimony of Clio B., a parade participant

She called John Barisone and left a message asking to receive a citation for her participation in the parade. She said that she worked really hard to organize for the parade and that it was not fair that only Wes received a citation. Therefore, she asked for one too. However, she did not receive a reply or a citation. 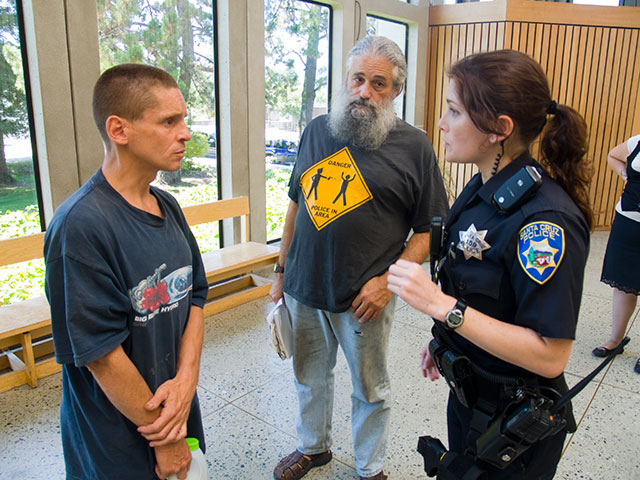 Officer Schonfield stated, "You can't come in because you are high." However, the individual walked backed into court. This person did not disturb the court, and was not kicked out by Judge Almquist.
http://bradleystuart.net
Add Your Comments
LATEST COMMENTS ABOUT THIS ARTICLE
Listed below are the latest comments about this post.
These comments are submitted anonymously by website visitors.