Aaronson, in a letter to Council circulated at Monday's Public Safety Committee, said the investigation "is incomplete and flawed for a very predictable reason." 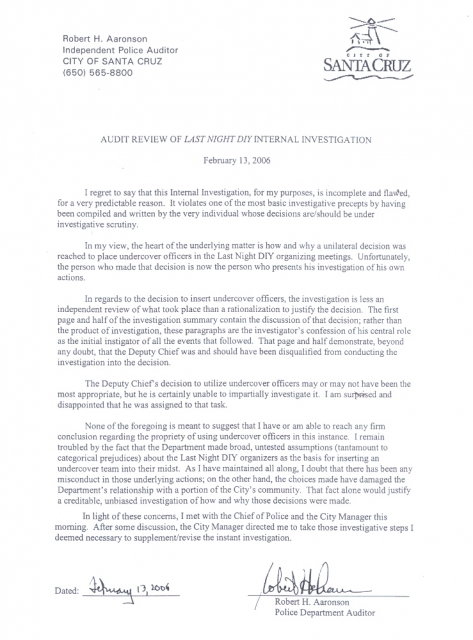 Santa Cruz, CA, February 15th, 2006: Police Auditor Bob Aaronson rejected the results of the Santa Cruz Police Department’s investigation of its own behavior in the Parade Spying Scandal. Heading the investigation into police spying was Deputy Chief Kevin Vogel who, according to public records obtained by the ACLU, was the officer who ordered the undercover infiltration. Predictably, the police cleared themselves of any wrong-doing. Additionally the report attempted to make the case that the spying, while legally questionable, was expedient and useful.

Aaronson, in a letter to Council circulated at Monday's Public Safety Committee, said the investigation "is incomplete and flawed for a very predictable reason. It violates one of the most basic investigative precepts by having been compiled and written by the very individual whose decisions are and should be under investigative scrutiny." He went on to say "I am surprised and disappointed that he was assigned to that task."

SCPD Deputy Chief Kevin Vogel and Lt. Rudy Escalante learned about the planned grassroots New Year's Eve parade in October. Without attempting to contact parade organizers, SCPD chose to send two undercover officers to the planning meetings held in a private residence to learn everything they could about the group and the event. In the internal investigation, they claim to have been alarmed by what they described as “a defiant tone.”

Auditor Aaronson said in his letter to Council, "I remain troubled by the fact that the Department made broad, untested assumptions about the Last Night DIY organizers as the basis for inserting an undercover team into their midst." He described those assumptions as "tantamount to categorical prejudices."

From the beginning SCPD observed that the planned parade was a peaceful gathering with no serious criminal intent, yet they continued infiltrating meetings undercover for another three months. Though the initial conclusion of undercover officers was that the parade planning group “will be a peaceful gathering” and that they “have nothing to hide,” SCPD made no attempt to contact the group and continued to infiltrate the group from October to December.

“In other words,” said parade organizer Wes Modes, “they went from the merest hunch all the way to undercover infiltrating without taking any of the steps in between. This was a community group planning a peaceful act of civil disobedience.” Modes was one of the organizers profiled in the police investigation of the parade, along with two other people.

John Hirst who lived in the Santa Cruz house where the meetings took place, was not involved in parade planning. However, he is identified in the internal investigation as one of the main organizers. A detailed police dossier appears in the report along with his private information, details about his appearance, scars, and past police history. Details of other individuals are identified in the report by name who played a peripheral part in parade planning.

SCPD used their presence at the planning meetings to gather information about other community groups and First Amendment activities taking place.. They used this information to monitor events and tip off other outside agencies. Officers posing as parade planners gathered information about the planned peaceful protest against virgin forest destruction by Victoria’s Secret and relayed this information to Capitola Police. On the date of the protest, dozens of officers denied protesters entrance to the mall. Infiltrators also gathered information about Art & Revolution's “Anti-Corporate Christmas Caroling” on Pacific Ave. without any evidence that the group had any intention of breaking any laws. Police monitored the group's activities at the event.

In the report, Vogel makes the claim that undercover monitoring of the parade planning meetings was “invaluable” and ensured public safety and provided useful intelligence. However, during the infiltration, police erroneously profiled an uninvolved person as a primary organizer, were unaware of three of the six planning meetings, were unaware of the email list, reported dates of other protests incorrectly, and interfered with first amendment activities.

Even without SCPD assistance, Vogel thought “the parade went very smoothly.” Elsewhere in the report it is noted that parade organizers made their own arrangements for sanitation, security, traffic, and conflict management.

According to White v. Davis (1975) the California Supreme Court determined that monitoring of peaceful groups risks chilling free expression and violates the state and federal constitutional protections of free speech, free assembly, and privacy. In response, Attorney General Bill Lockyer made a series of recommendations to local governments to protect citizen's rights to free expression. The city of Santa Cruz has yet to adopt these standards. Some lawyers fear that without a policy that includes first amendment protections, the Santa Cruz City Council is exposing the city to potential lawsuits.

SCPD has received recent criticism for having no policy on undercover operations. Included in Friday’s report is a hastily-assembled one-page policy dealing with undercover surveillance that provides no protections for people’s rights. The proposed policy gives the police the right to monitor any group in which the group or any member of the group plans any illegal activity. This gives the SCPD the green light to monitor any type of civil disobedience or peaceful group if they felt that a member of the group planned to break any laws.

Questions remain about how extensive police spying is in Santa Cruz, what were the costs involved in the spy operation, and what Santa Cruz residents can do to keep police officers out of their meetings and their homes.