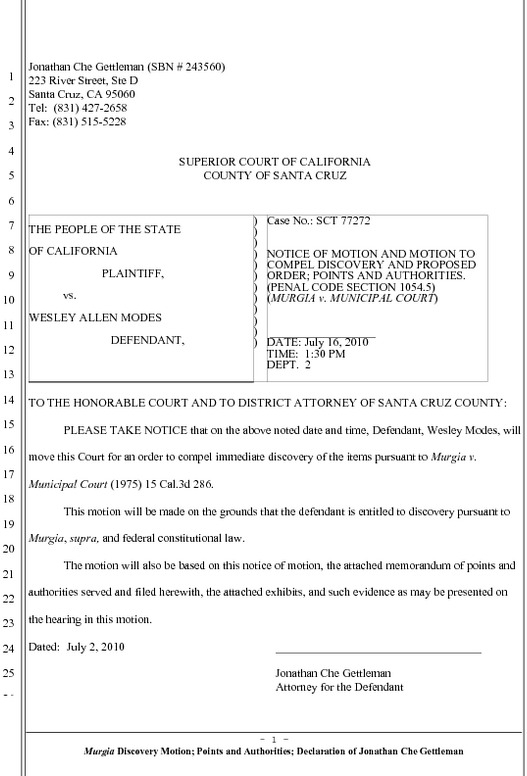 Download PDF (155.7KB)
On Friday, attorney Jonathan Gettleman filed a Murgia discovery motion against the city on behalf of Wes Modes. This is the first step in proving discriminatory prosecution based on the "invidious criteria" of Modes involvement in anarchist projects.

Among other things, the motion includes a chronology of over 50 incidents showing the obsessive focus of SCPD and city officials on Modes and anarchist projects he is involved in since he outed police infiltrators in 2005.

Modes returns to court on July 16th for the next phase of the recent series of high-profile infraction case, claimed by supporters as harassment of Modes, a well-known anarchist activist. In the July 16th hearing for his alleged participation in the DIY New Year's parade, defense will demonstrate a pattern of discriminatory prosecution based on Modes political affiliation.

Background: According to Last Night participants, the parade infraction is the latest in a series of police harassment that Wes has received since outing police infiltrators in 2005. "Wes is being unjustly targeted for being an outspoken critic of the Santa Cruz Police Department. He's being singled out from a crowd of community organizers, facilitators and participants. It goes completely against the community spirit of this Santa Cruz celebration," said parade participant Grant Wilson. Now Modes' is being harrassed with a minor code violation for participating in a parade celebrated by the entire Santa Cruz community.

Wikipedia on Murgia: A Murgia motion is a common motion in California criminal law based on California Supreme Court rulings (Murgia v. Municipal Court (1975) 15 Cal.3d 286) that establish that defendant may be entitled to a dismissal of criminal charges upon a showing of selective prosecution for improper purposes, amounting to a violation of right to equal protection of law.

Wikipedia on Selective prosecution: In jurisprudence, selective prosecution is a procedural defense in which a defendant argues that they should not be held criminally liable for breaking the law, as the criminal justice system discriminated against them by choosing to prosecute. In a claim of selective prosecution, a defendant essentially argues that it is irrelevant whether they are guilty of violating a law, but that the fact of being prosecuted is based upon forbidden reasons. Such a claim might, for example, entail an argument that persons of different age, race, religion, or gender, were engaged in the same illegal actions for which the defendant is being tried and were not prosecuted, and that the defendant is only being prosecuted because of a bias. In the US, this defense is based upon the Equal Protection Clause of the 14th Amendment, which requires that "nor shall any state deny to any person within its jurisdiction the equal protection of the laws."

Since this is an infraction case, Modes is not entitled to a public defender and so must foot the bill for a defense lawyer. To donate to the support of Wes Modes' case, go to the Red Hill Legal Support website: redhillsupport.wordpress.com 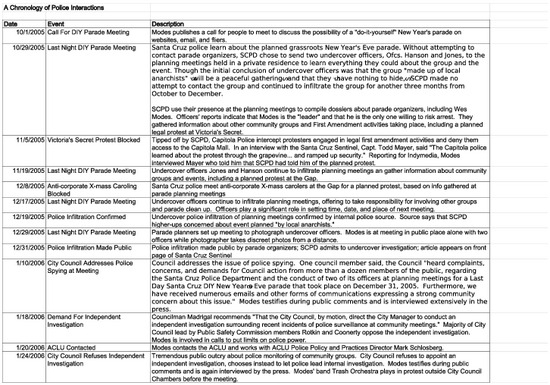 Surprise court appearance this Monday morning, with virtually no notice. The city attorney persuaded the court to have the matter heard today (it was only supposed to be a confirmation for Friday's hearing).

A week ago Friday, Wes' lawyer filed a Murgia discovery motion (alleging discriminatory prosecution) and a request for continuance (to continue the trial until after the Murgia motion was heard). The city attorney opposed the continuance and so the Murgia discovery motion wasn't heard by the court, so Wes won't get documents that would have helped show the city's bias against Wes. In general, since this is an infraction matter, the judge would like this case to be over and done with as soon as possible and so wasn't interested in anything that delayed the trial.

Of course it is difficult to defend against participation in a parade, when the evidence fairly shows Wes' participation along with thousands of other people. The only argument left really is to try to show discriminatory prosecution (even without Murgia material) at Friday's trial which the defense will argue. The city attorney has the burden of proof to show Wes was at the parade and knew for certain that the parade this year was not permitted.

Feel free to come and show solidarity.
Add Your Comments
Support Independent Media
We are 100% volunteer and depend on your participation to sustain our efforts!