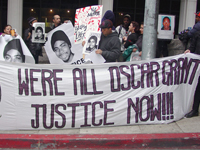 On June 1st, family, friends, and community activists gathered in front of Alameda County District Attorney Nancy O'Malleys office in Oakland to demand a vigorous prosecution of Johannes Mehserle for the murder of Oscar Grant. The trial represents the first time in California history a law enforcement officer has been tried for murder in a line-of-duty shooting. Those gathered solemnly recognized that the Judge overseeing the trial, Los Angeles County Superior Court Judge Robert J. Perry, has granted a number of requests from Mehserle's defense attorney Michael Rains intended to shift the blame to Oscar Grant for his own murder.

The next day jury questionnaires were handed out in Los Angeles Superior Court and — after numerous motions have been heard in pre-trial hearings in LA this year and a jury was selected last week which includes no African Americans — the long-awaited trial began with opening statements on June 10th. Alameda Deputy DA David Stein declared in his opening remarks, "The shooting of Oscar Grant was the result of [BART police] emotions taking over. It was the result of aggression taking over for training and discipline." He asked jurors, “What happens when an officer believes he has the right to mistreat, abuse people in a public setting?"

On June 14th, the beginning of the first full week of trial, the LA Coalition for Justice for Oscar Grant made a call — "All Out to the Courthouse" — and hundreds rallied for justice. In Oakland, a mass community gathering has been called for 14th Street and Broadway at 6pm the day of the Mehserle verdict.

oscar grant flyers spotted around south berkeley | Tears Flow as the Defense Rests in Mehserle Trial | Will the Killer of Oscar Grant Go Free? | Johannes Mehserle pulverized on the witness stand | COMMUNIQUÉ: MANSLAUGHTER IS NOT ENOUGH! IT’S MURDER OR NOTHING! | Los Angeles Coalition for Justice for Oscar Grant to US Obama/Holder Justice Dept | Urge police to 'give back' |

Benefit for Oscar Grant's Mother! | Drop All the Charges Against Opi and David | Splitting Hairs at the Oscar Grant Trial |

Video of family and supporters on the first day of Mehserle's trial in LA - June 10, 2010 | A Cursory Look at Some of the Issues of the Johannes Mehserle Trial - FIVE |

KPFA: Update from Thandisizwe Chimurenga on the Oscar Grant Trial (6/10/10) | Murder Trial Begins for the Killer of Oscar Grant | Oscar Grant took photo of Mehserle pointing taser at him before Mehserle drew gun and shot him in the back |

Financial support requested: Court Update on Holly, JR and Drew of the Oakland 100