Add an Event
Newswire
Calendar
Features
Home
Donate
From the Open-Publishing Calendar
From the Open-Publishing Newswire
Indybay Feature
Publish to Newswire
Add an Event
Related Categories: East Bay | Police State & Prisons | Racial Justice
Sunset Vigil for Oscar Grant and All Police Victims Warns that Justice Is in Danger, 6/1/10: Photos
by dave id
Thursday Jun 3rd, 2010 9:28 AM
On the eve of the beginning of the trial of Johannes Mehserle for the murder of Oscar Grant in Los Angeles County, family, friends, and community activists gathered for a vigil for Oscar Grant and all victims of police violence. Those gathered solemnly recognized that the Judge overseeing the trial, Los Angeles County Superior Court Judge Robert J. Perry, has granted a number of requests from Mehserle's defense attorney Michael Rains intended to shift the blame to Oscar Grant for his own murder. The location of the vigil, in front of Alameda County District Attorney Nancy O'Malleys office, was chosen to remind the DA that Mehserle is the one on trial, not Oscar Grant, and that the community demands a vigorous prosecution. Those in attendance were also adamant that regardless of if the history of police not being held to account for their crimes against people of color plays out once again in the Mehserle trial, the fight for justice will continue. A mass community gathering has been called for 14th Street and Broadway in Oakland at 6pm the day the Mehserle verdict is announced. 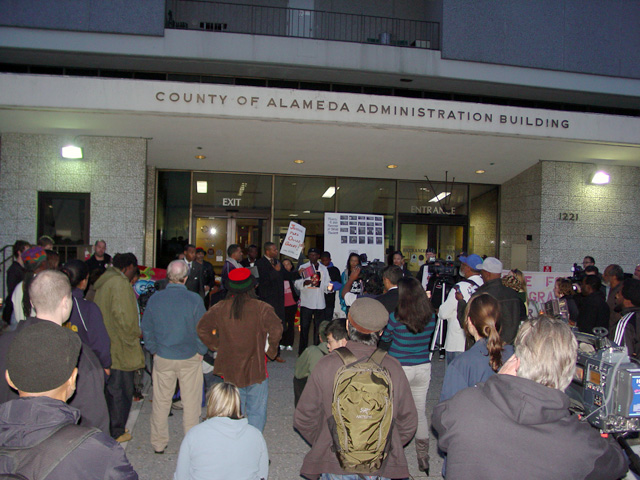 Earlier in the day, in what was to be the last pre-trial hearing before jury selection was set to begin June 2nd, Judge Perry approved a defense motion to allow video "expert" Michael Schott to offer his interpretation of various videos of the murder. Perry's belief in the value of such testimony stands in stark contrast to that of Alameda Superior Court Judge C. Don Clay who oversaw Mehserle's preliminary hearing. Judge Clay made clear that he could use his own eyes to see the video and did not need an expert to tell him what he saw. Clay also stated at the end of the preliminary hearing that he had "no doubt that Mehserle intended to shoot with his gun and not his taser.”

Along with other recent rulings favorable to the defense such as allowing information from an arrest report of Oscar Grant's to be introduced into the court room -- knowing full well that Mehserle's history as a police officer cannot be brought into the trial due to California's Police Bill of Rights -- Judge Perry appears to be giving Mehserle and Rains virtually every opportunity they have sought to build doubt in jurors' minds. Scott has already angered Oscar Grant's family and friends when he asserted in the pre-trial hearing that Oscar's friend Jackie Bryson struck Mehserle and Oscar Grant assaulted BART officer Tony Pirone before Oscar was shot in the back by Mehserle. This is the testimony Judge Perry finds so compelling and necessary. While attempts to paint the situation at Fruitvale BART early New Year's morning 2009 as dire for BART officers on the platform were shown to be completely untrue during the preliminary hearing, Rains now has new hope to portray Mehserle, Pirone, and the five other BART officers present as well-armed victims.

[Remember Pirone, along with his partner Marysol Domenici, the instigators of the violence on January 1st, 2009 before Mehserle even walked onto the platform, were finally fired by BART after over a year on paid leave. Tony Pirone was fired because his aggressive and racist behavior with Oscar and his friends "isn't accepted," in the words of interim BART Chief Dash Butler. Likewise, Marysol Domenici was fired by BART, no doubt due at least in part to her incredibly perjurious testimony during Mehserle's preliminary hearing about BART officers fearing for their lives and her claim in court that she "wanted to shoot someone that night."]

Only the most ridiculous defense motions have been denied by Perry, such as the request to have police officers serve on the jury (which is contrary to California law, largely at the request of police lobbies themselves) and to call Oscar Grant's family's and friend's private attorney John Burris to testify in the trial.

While newly appointed Alameda County District Attorney Nancy O'Malley has two attorneys and support staff in Los Angeles to pursue the case, and the DA's website states that her office is dedicated to "the vigorous protection of victim’s rights," she has made no statements on behalf of Oscar Grant as she likely would for just about anyone else not killed by police. Tellingly, O'Malley recently admitted to the corporate media to being torn between the desires of the African American community for justice and of police to not be held accountable for their crimes -- “It’s a very difficult situation, all the way around," O'Malley said. As such, her commitment to justice for Oscar Grant is questionable at best. We'll know soon enough.

The trial is currently scheduled to begin with opening statements on June 10th and Judge Perry has declared his intention that it conclude within roughly 16 court days.

http://indybay.org/oscargrant
§Preparing candles for the vigil
by dave id Thursday Jun 3rd, 2010 9:28 AM 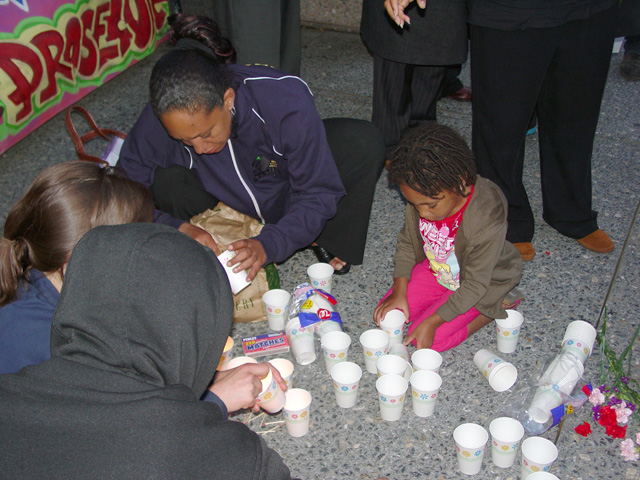 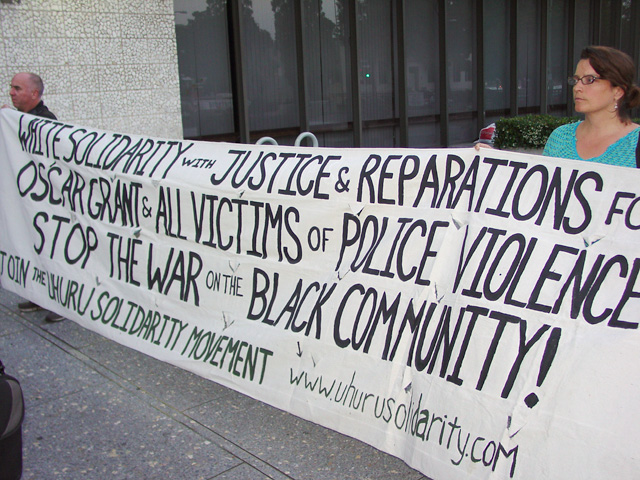 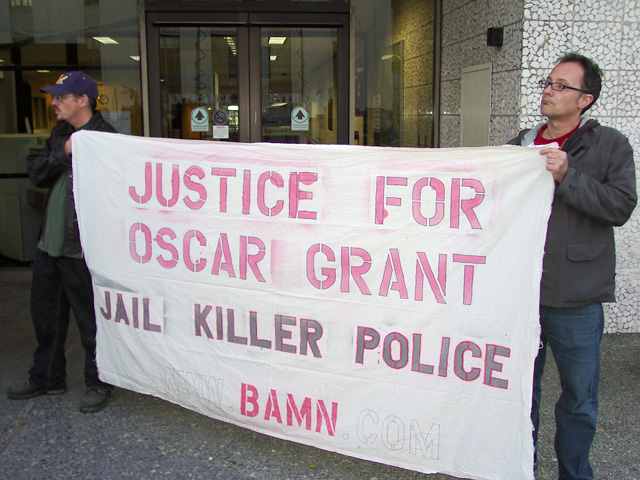 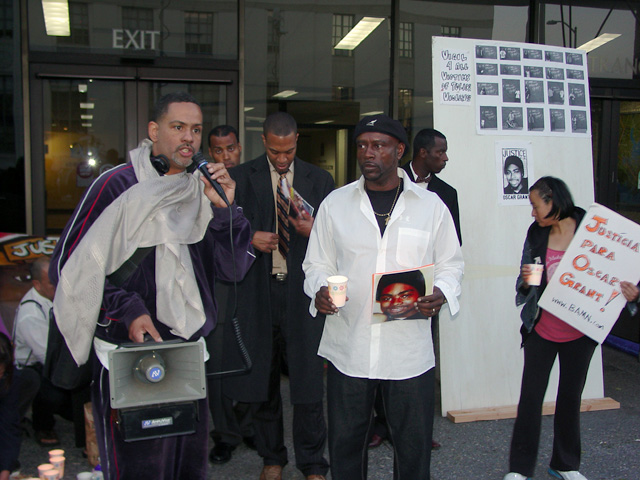 Bikes 4 Life will be having it's 3rd Annual Peace Bike Ride from Lake Merritt to West Oakland. This year the ride will be a NIGHT RIDE that will be followed with an outside BIKE-IN drive-in style movie. The movie will be a classic flick. If interested Please Save The Date. Saturday July, 24th 7:30pm Lake Merritt ALL POWER TO THE CYCLIST! 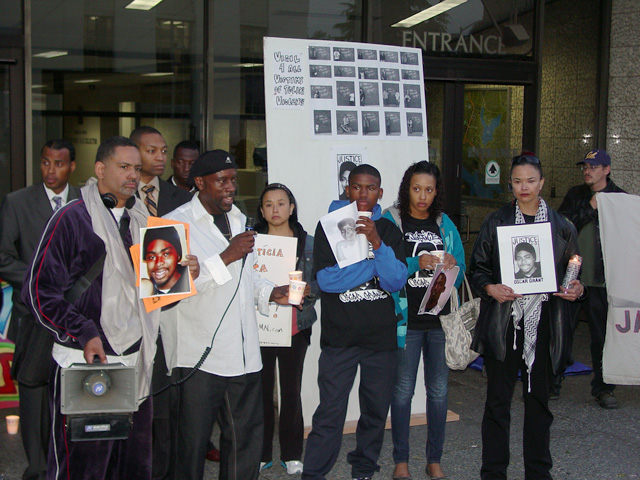 http://indybay.org/oscargrant
§Minister Keith Muhammad of the Nation of Islam
by dave id Thursday Jun 3rd, 2010 9:28 AM 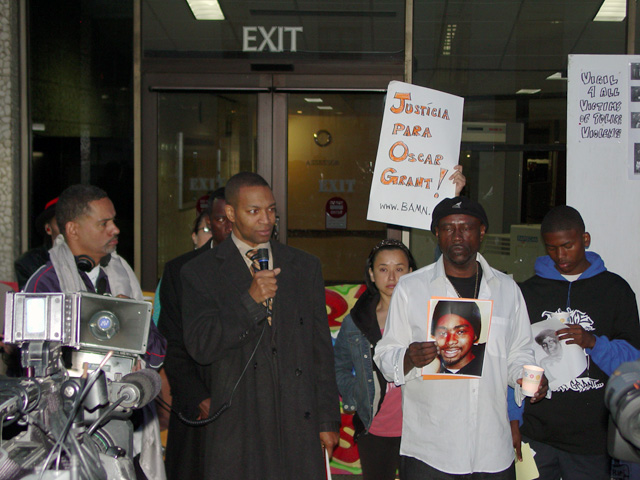 http://indybay.org/oscargrant
§Youngest attendee for justice with candle in hand
by dave id Thursday Jun 3rd, 2010 9:28 AM 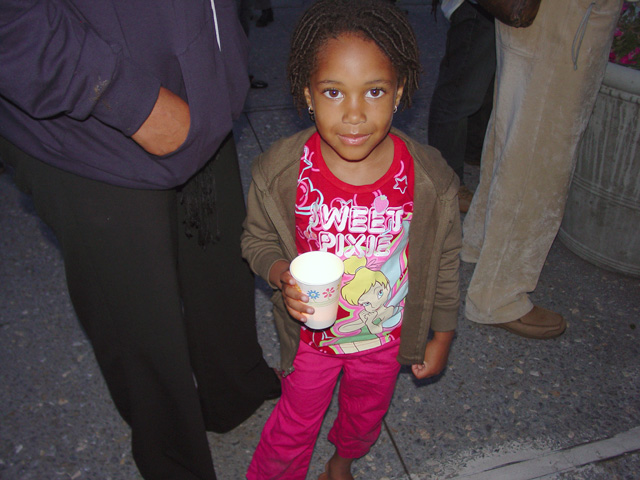 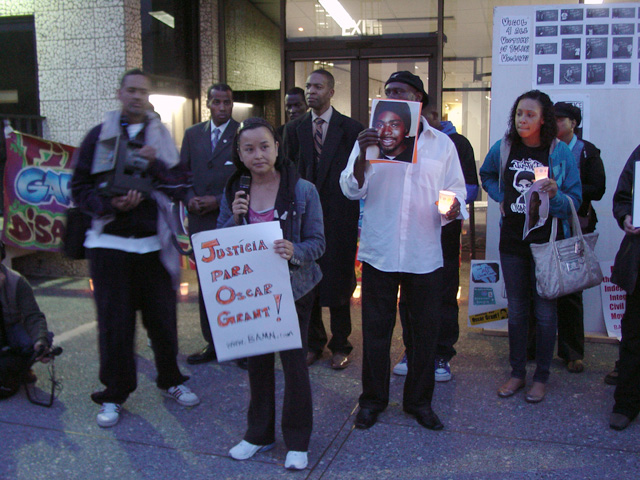 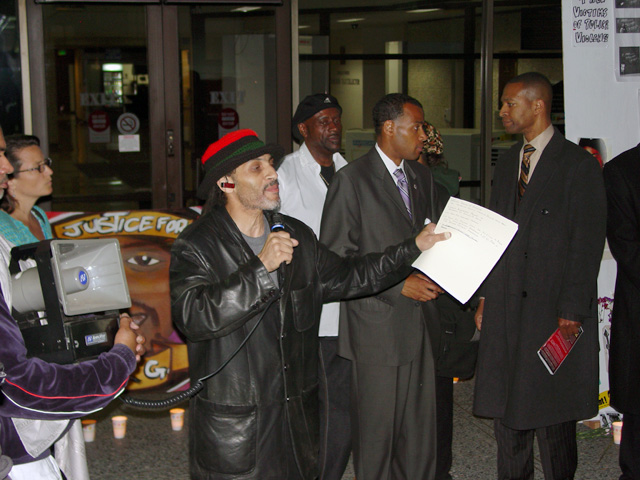 http://indybay.org/oscargrant
§Lesley of the Oakland General Assembly for Justice for Oscar Grant and New Year's Movement for Justice
by dave id Thursday Jun 3rd, 2010 9:28 AM 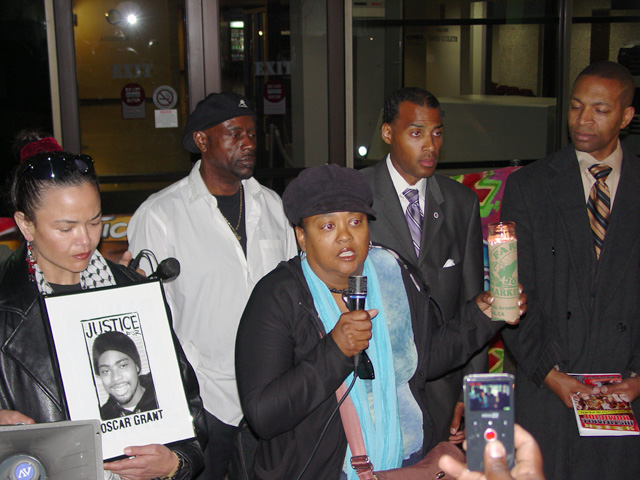 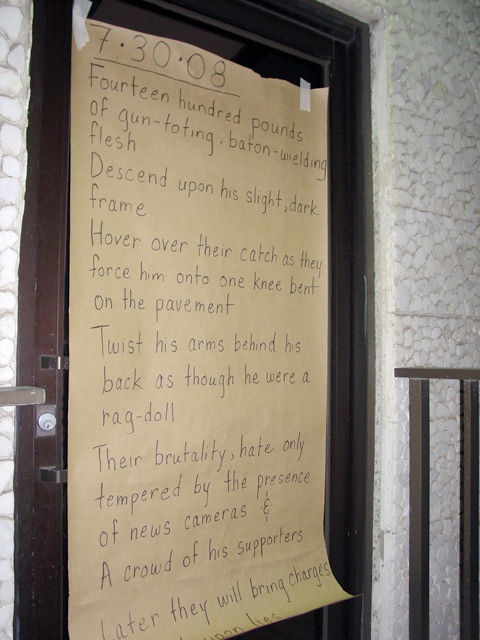 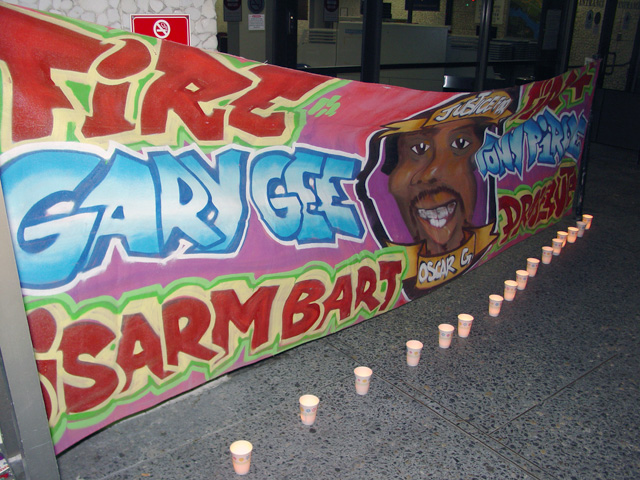 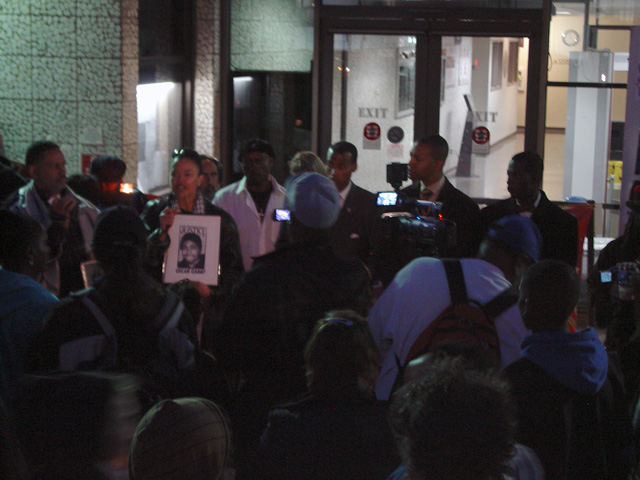 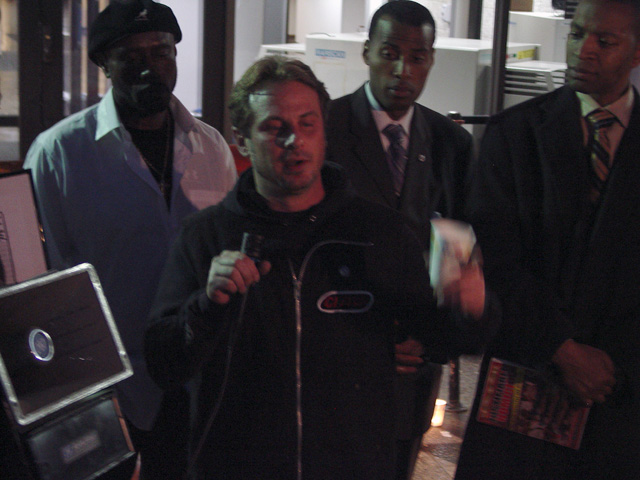 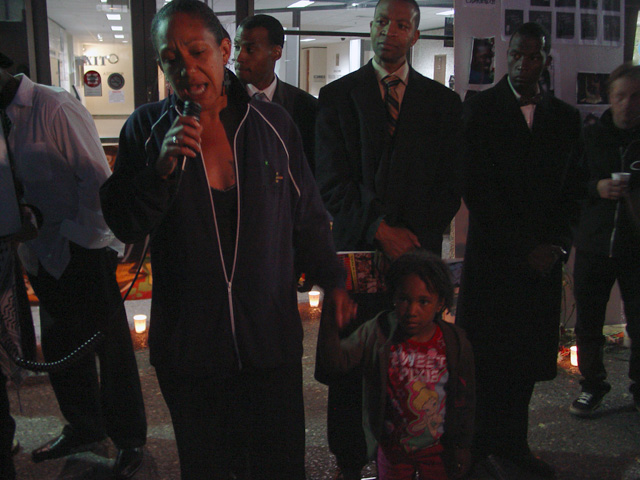 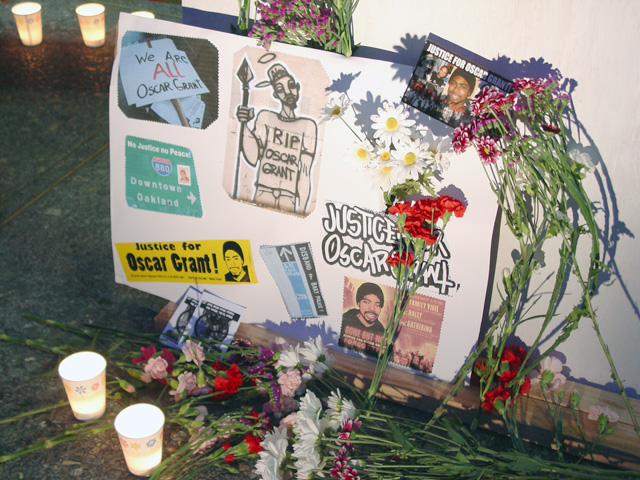 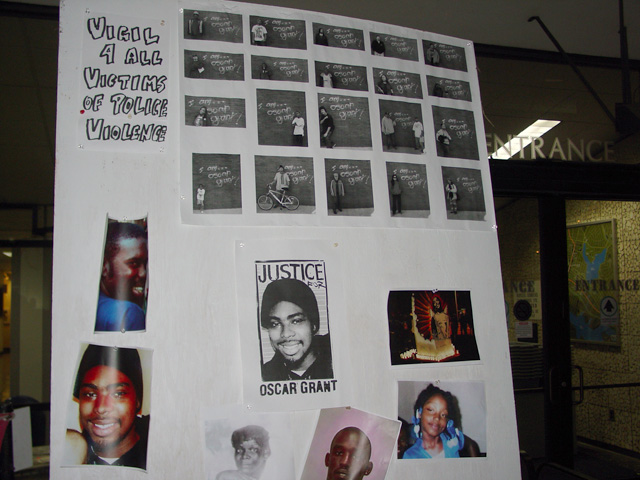