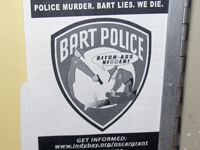 On September 11th, the day after the court denied Mehserle attorney Michael Rains' 995 motion to dismiss the murder case due to supposed judicial improprieties, Rains filed his long-expected motion for a change of venue. Mehserle and his defense team appear to be hoping for the murder trial to be moved out of Alameda County as their last best chance for him to avoid a conviction for the murder of Oscar Grant III on January 1st, 2009.

In the motion, Rains cites actions taken by CAPE (Citizens Against Police Executions), BAMN (By Any Means Necessary), No Justice No BART, the Town Halls for Justice for Oscar Grant, the Revolution Club, Uhuru House, and coverage on Indybay as reasons the venue should be moved. He accuses these groups of spreading "disinformation" about the case and unfairly amplifying political pressure to prosecute.