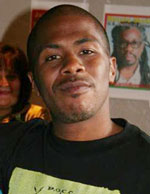 UPDATE: In a brief hearing on September 21st, Judge Jacobson revoked a stay-away order which kept Valrey away from downtown Oakland. His trial has been postponed until late October. October 2nd report: OPD, DA have no case against journalist M.O.I. JR.

J.R. Valrey will stand trial in Oakland on felony arson charges, after he was arrested while reporting on the Oscar Grant Rebellion on January 7, 2009. Valrey is a producer at KPFA radio, associate editor and multimedia director of the San Francisco Bay View newspaper, and runs the Block Report Radio website.

Valrey believes his arrest was payback for his years covering police brutality in print and on the radio. "I was covering it as a journalist," he said. "But one thing that's different about me from the rest of the rebels is that the Oakland police know me. ... I'm not a stranger to the power structure of Oakland, so I believe like many others that I was targeted politically... We were basically set up on trumped-up charges." Valrey's lawyer, Marlon Monroe, says the case against Valrey is weak and will fail.

“J.R. has really been a thorn in the police department's side,” says SF Bay View publisher Willie Ratcliff, who has published Valrey's work. “His stories are like those of Mumia Abu Jamal. He's young and really smart, and the people love him, they are really organizing, so the police are always after him. The judge even tried to get him to cop a plea to a misdemeanor, something I've never seen a judge do. But they really blew it this time because he didn't do anything except his job. The police even admitted that they didn't see him set any fire.”

Supporters have been asked to attend a hearing on Sept. 21st to "[l]et the judge, OPD, the City, and whoever else needs to be aware that we stand in loving support of truth and justice and that JR is a gift and his work is valuable to the health and well being of this community. It is unacceptable that he be targeted and charged with crimes he did not commit - because he serves this community."