by dave id
The day after the court denied Johannes Mehserle defense attorney Michael Rains' 995 motion to dismiss the murder case due to supposed judicial improprieties, Rains filed his long-expected motion for a change of venue (attached below). Mehserle and his defense team appear to be hoping for the murder trial to be moved out of Alameda County as their last best chance for him to avoid a conviction for the murder of Oscar Grant III on January 1st, 2009. 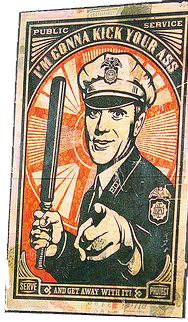 Mehserle's defense was repeatedly embarrassed during the unusually long preliminary hearing in late May and early June when BART officer after BART officer was called to testify by the defense only to be exposed as liars by video evidence and their own contradictory statements. In that regard, Mehserle's defense team clearly failed him at the preliminary hearing, and it is not expected that the actual trial will be incredibly different with the same officers testifying and the same video evidence presented (with some "expert" witnesses and smearing of Oscar Grant added in).

The defense's 995 motion for dismissal of the case due to supposed judicial misconduct during the preliminary hearing was thin at best and easily shot down by the court within a week of that September 4th hearing.

Now Rains has thrown down the gauntlet with the change of venue motion he filed with the court on September 11th. At this point his best shot at avoiding a conviction for Mehserle appears to be moving the trial to a less diverse county where the defense could more reliably count on a judge and/or jury acting on biases in favor of police and against people of color rather than the facts of the case which clearly call for a murder conviction for Mehserle. From reading the change of venue motion, it is obvious that Rains and his staff have been working on it for quite some time. It is extremely detailed. The motion itself is seventy-six pages in length, and staff in charge of records at the court house said it was accompanied by two boxes full of related Exhibits. Alameda County Superior Court Judge Morris Jacobson, scheduled to begin hearing the venue motion on October 2nd, has an arduous task on his hands to read the document in its entirety and to review the thousands of media reports listed in the motion, not to mention the numerous judicial case histories cited and any forthcoming opposition statements from the Alameda County District Attorney's office.

In the motion itself, Rains piles on a number of racial arguments that are insulting to the intelligence and integrity of the people of Oakland and Alameda County. He basically claims that African Americans in Oakland are so biased that they are incapable of fairly judging the case, so therefore the venue should be moved. Additionally, he argues that he would have to so thoroughly grill potential African American jurors for their bias that the defense would be accused of racism, so again the venue should be moved. Oakland has a long history of white police officers abusing and murdering black citizens, and somehow Mehserle's shooting an unarmed Oscar Grant in the back in Oakland is merely a coincidence, so the venue should be moved because the ongoing crimes of racist police create an unfair bias against Mehserle within the potential jury pool. Groups such as the Black Panthers, Uhuru House/African People's Socialist Party, and the Nation of Islam arose in Oakland to fight against such very real police brutality, so their unfair bias means the venue should be moved. Los Angeles police officers Laurence Powell, Stacey Koon, Timothy Wind, and Theodore Brisenio had their venue changed in the videotaped Rodney King beating case -- and we all know how great that turned out -- so the venue should be moved in this case even more so. African Americans make up only 13% of the population of Alameda County but because they as a demographic group are not capable of being impartial jurists, the trial should be moved. These are the racist and illogical arguments Rains makes in his change of venue motion.

Rains cites the Oscar Grant Rebellion that occurred in January as another reason for venue change, but he neglects to give proper weight to the fact that the reason for such heightened anger at the time was that Mehserle had not been arrested or even questioned by authorities immediately after the murder on January 1st and that he was later granted bail. While Mehserle continues to enjoy his personal freedom on bail, his arrest on January 13th largely diminished the size and vociferousness of later protests. Community activists have been adamant yet calm as they have pressed for justice in the courts and at BART since the initial outrage in January.

Rains claims that media coverage is one reason for supposed bias inhibiting a fair trial for Mehserle in Alameda County. He cites numerous corporate media reports and then devotes an entire section of the motion to community activists and independent media. He claims actions taken by CAPE (Citizens Against Police Executions), BAMN (By Any Means Necessary), No Justice No BART, the Town Halls for Justice for Oscar Grant, the Revolution Club, Uhuru House, and coverage on Indybay as reasons the venue should be moved. He accuses these groups of spreading disinformation about the case and unfairly amplifying political pressure to prosecute.

One such passage reads as follows:


Presumably Rains goal here as much as anything is to scare Judge Jacobson, who will be hearing the venue motion, because why else would he include irrelevant things like Indybay's "Principles of Unity" if not to invoke scary words and phrases like "anti-capitalist" and "global struggles against exploitation and oppression." Likewise, how The Ruckus Society ended up in his list of evil venue-change community activist groups is unclear if not to raise the terrifying specter of direct action in the streets.

It's interesting to note that the corporate media coverage of the change of venue motion thus far has neglected to mention Indybay or any of these community activist groups (SF Chronicle, 9/12/09, Oakland Tribune, 9/14/09, San Jose Mercury News, 9/14/09). Rains whines yet again about the gag order imposed on him, but these corporate media outlets with massive audiences rarely report on the work of community groups fighting for justice, preferring instead to repeat without question the lies in Rains' filings, the spin of BART's PR lackeys, and the dishonest testimony of BART police. It is hoped that by purchasing and sharing the motion here on Indybay as a community service that others, unlike the corporate media, will peruse the full text of the motion and write further analyses of the tactics being employed in Mehserle's defense. [Please, credit Indybay with a link when your sourcing originates here.]

The Alameda District Attorney -- either long-time DA Tom Orloff or his newly appointed replacement Nancy O'Malley -- has yet to file a response to Johannes Mehserle's change of venue motion. The hearing is currently scheduled for October 2nd at the Alameda County Court House in Oakland. 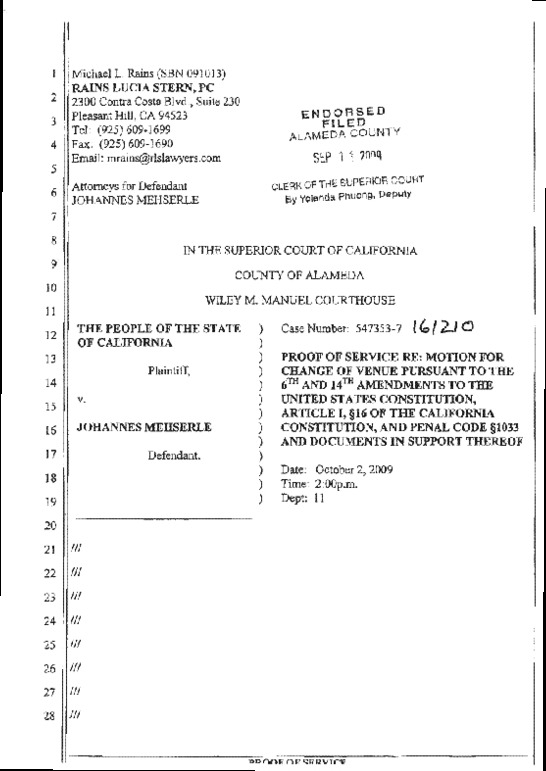 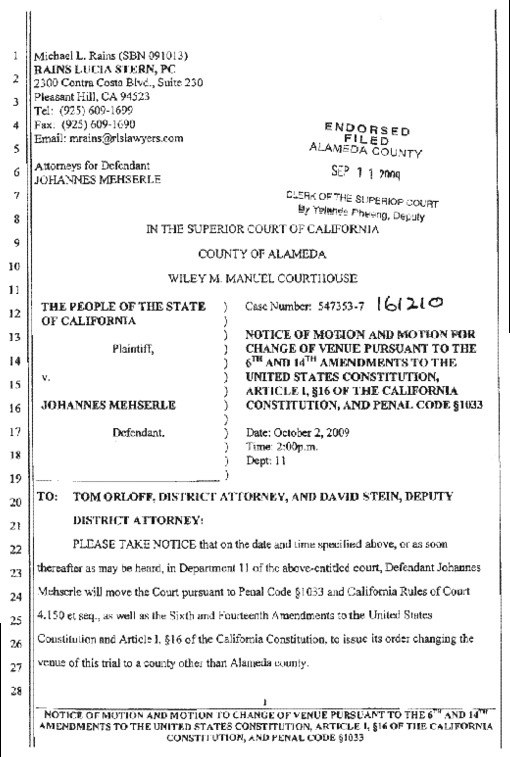 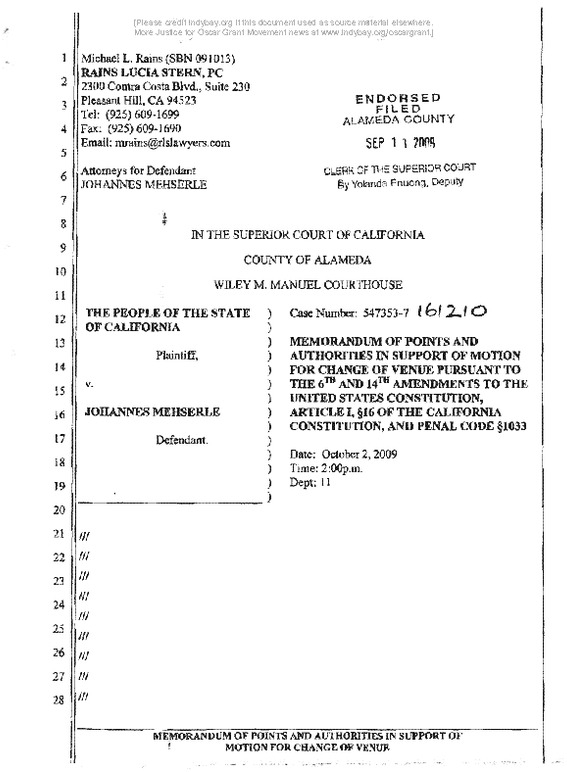 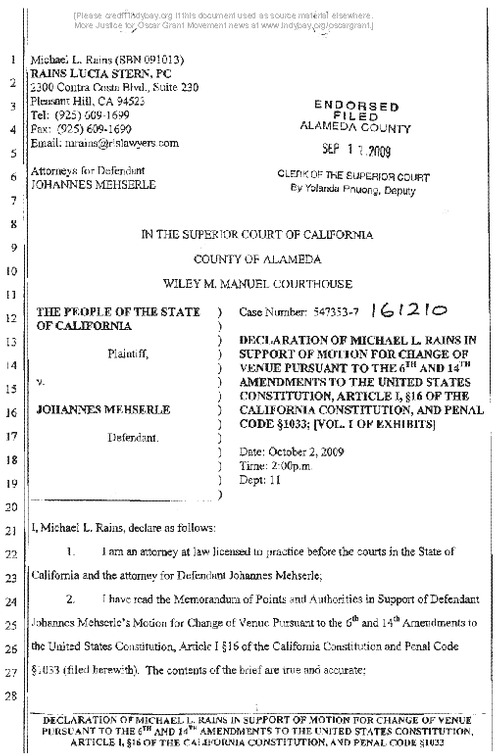 END_OF_DOCUMENT_TOKEN_TO_BE_REPLACED
Add Your Comments
Latest Comments
Listed below are the latest comments about this post.
These comments are submitted anonymously by website visitors.
TITLE
AUTHOR
DATE
Attorney: Mehserle stands no chance if trial is here
oaktrib
Mehserle motion cites Alameda Co. racial divide
sfchron
MEHSERLE IS A MURDERER
TALEEM
comment on history in the brief
person
100s or 1,000s
Jach
150 would be a low estimate...
voice for the powerless
Indybay = community townhall
c
fair trial?
yes
Could he get a fair trial here?
Jach
My two cents
M
Support Independent Media
We are 100% volunteer and depend on your participation to sustain our efforts!