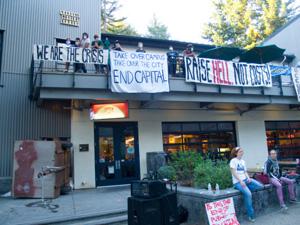 On Thursday, September 24th, students at UC Santa Cruz began the occupation of the Graduate Student Commons as part of a day of action at all UCs across the state. The building is located in a central location on campus, across from the Bay Tree Bookstore. The occupiers held a dance party on Friday the night and another dance party on Wednesday night. By Thursday morning, the occupation had come to an end.

A communique read from the occupied building states, "We are occupying this building at the University of California, Santa Cruz, because the current situation has become untenable. Across the state, people are losing their jobs and getting evicted, while social services are slashed. California’s leaders from state officials to university presidents have demonstrated how they will deal with this crisis: everything and everyone is subordinated to the budget. They insulate themselves from the consequences of their own fiscal mismanagement, while those who can least afford it are left shouldering the burden. Every solution on offer only accelerates the decay of the State of California. It remains for the people to seize what is theirs."

Flyers | Interview | Why occupy the GSC?

See also: Walkout and Rallies at UC Santa Cruz to Defend the Future of Public Education