Add an Event
Newswire
Calendar
Features
Home
Donate
From the Open-Publishing Calendar
From the Open-Publishing Newswire
Indybay Feature
Publish to Newswire
Add an Event
Related Categories: Santa Cruz Indymedia | Education & Student Activism | Labor & Workers
UC Santa Cruz Students OCCUPY!
by calmlikeabomb
Thursday Sep 24th, 2009 4:59 PM
http://occupyCA.wordpress.com
Copy the code below to embed this movie into a web page:
Download Video (5.7MB) | Embed Video
http://occupyCA.wordpress.com
§coalition including students and staff occupy Graduate Student Commons
by ~Bradley (bradley [at] riseup.net) Thursday Sep 24th, 2009 5:14 PM
On September 24th, students at UC Santa Cruz began the occupation of the Graduate Student Commons as part of a day of action at all UCs across the state. The building is located in a central location on campus, across from the Bay Tree Bookstore. Occupiers are calling for another day of walkouts on Friday.

We are occupying this building at the University of California, Santa Cruz, because the current situation has become untenable. Across the state, people are losing their jobs and getting evicted, while social services are slashed. California’s leaders from state officials to university presidents have demonstrated how they will deal with this crisis: everything and everyone is subordinated to the budget. They insulate themselves from the consequences of their own fiscal mismanagement, while those who can least afford it are left shouldering the burden. Every solution on offer only accelerates the decay of the State of California. It remains for the people to seize what is theirs.

The current attack on public education – under the guise of a fiscal emergency – is merely the culmination of a long-term trend. California’s regressive tax structure has undermined the 1960 Master Plan for free education. In this climate, the quality of K-12 education and the performance of its students have declined by every metric. Due to cuts to classes in Community Colleges, over 50,000 California youth have been turned away from the doors of higher education. California State University will reduce its enrollment by 40,000 students system wide for 2010-2011. We stand in solidarity with students across the state because the same things are happening to us. At the University of California, the administration will raise student fees to an unprecedented $10,300, a 32 percent increase in one year. Graduate students and lecturers return from summer vacation to find that their jobs have been cut; faculty and staff are forced to take furloughs. Entire departments are being gutted. Classes for undergraduates and graduates are harder to get into while students pay more. The university is being run like a corporation.

Let’s be frank: the promise of a financially secure life at the end of a university education is fast becoming an illusion. The jobs we are working toward will be no better than the jobs we already have to pay our way through school. Close to three-quarters of students work, many full-time. Even with these jobs, student loan volume rose 800 percent from 1977 to 2003. There is a direct connection between these deteriorating conditions and those impacting workers and families throughout California. Two million people are now unemployed across the state. 1.5 million more are underemployed out of a workforce of twenty million. As formerly secure, middle-class workers lose their homes to foreclosure, Depression-era shantytowns are cropping up across the state. The crisis is severe and widespread, yet the proposed solutions – the governor and state assembly organizing a bake sale to close the budget gap – are completely absurd.

We must face the fact that the time for pointless negotiations is over. Appeals to the UC administration and Sacramento are futile; instead, we appeal to each other, to the people with whom we are struggling, and not to those whom we struggle against. A single day of action at the university is not enough because we cannot afford to return to business as usual. We seek to form a unified movement with the people of California. Time and again, factional demands are turned against us by our leaders and used to divide social workers against teachers, nurses against students, librarians against park rangers, in a competition for resources they tell us are increasingly scarce. This crisis is general, and the revolt must be generalized. Escalation is absolutely necessary. We have no other option.

Occupation is a tactic for escalating struggles, a tactic recently used at the Chicago Windows and Doors factory and at the New School in New York City. It can happen throughout California too. As undergraduates, graduate students, faculty, and staff, we call on everyone at the UC to support this occupation by continuing the walkouts and strikes into tomorrow, the next day, and for the indefinite future. We call on the people of California to occupy and escalate.

Press Contact: (eight-three-one) 332.8916
http://occupyCA.wordpress.com/
§live from the autonomous zone
by repost Friday Sep 25th, 2009 2:46 AM
"what goes on between bodies in an occupation is more interesting than the occupation itself."
-how is it to be done?

i arrived on ucsc campus sweaty and tired after biking 20 miles to *my* school and back, feeling barely able to stand. the protest march arriving at bay tree plaza was not too inspiring; when the 100 or so people sat down in the street to discuss "what do we want?" all some people could think to do was shout slogans. the protest-form reached its absurd terminus in a group cheerleading session.

and then the occupation began. a sound system blared as about 20 bodies, wearing swine flu masks to both symbolize and defend against our modern sickness, barricaded themselves inside the graduate student commons, unfurled banners and began reading their beautifully-written communique, occupy california!, from the balcony overlooking the plaza. a few cops wandered through the dance party below, looking confused. and then it was time to begin barring the entrances we outside were asked to help with. the vague questions, the politics, the feuds great and petty disappeared as in the realm of tactics, friends, estranged acquaintances and perfect strangers together encountered the concrete possibilities: how to move this dumpster? where do we find more big rocks? how to best attach this section of fence to the building? trash vessels, quarry debris and other useless materials found new purposes in the architecture of barricades. the fatigue in my muscles was no longer important; it was go time. i had no idea when i put my t-shirt on in the morning that i would be wearing it over my face later in the day. thanks for that, comrades.

i won't be here long but it was too much for me to not make an appearance. there is a meeting going on now, reports coming in from actions in berkeley (occupiers sold out by liberal activists) and pittsburgh. the sound system still thumping below into the electric-lit night. the building, it turns out, legally belongs to the graduate student association, NOT the uc, who - it's said - won't be sending police without the gsa's say so. so far, so good. there is talk of more occupations. "escalation is absolutely necessary" said the communique. fuck. yeah.

a general assembly has been called for 10am tomorrow. see you there?

an overturned dumpster in this plaza is a more beautiful sight than 100 protest signs.

this is not about making demands.
the goal of every occupation is to grow, multiply and become irreversible.
block everything,
occupy everything,
strike without end,
toward collective action against all institutional frameworks.
towards social war,
against this world.

banners hanging from the balcony outside:
TAKE OVER CAMPUS, TAKE OVER THE CITY, END CAPITAL
RAISE HELL, NOT COSTS
ORGANIZE
OCCUPY
WE ARE THE CRISIS

some comrades at uc merced put out a pamphlet called "communique from an absent future: terminus of student life". it doesnt seem to be online yet, and i havent read the whole thing but it looks like a west coast cousin of the new school in exile's writings.
http://likelostchildren.blogspot.com/2009/...
§The Beachhead
by Occupy California Friday Sep 25th, 2009 8:52 PM
September 25, 2009

We in here are undergraduates, graduate students, teachers, workers, and unemployed. We are not leaving.

People ask what we want. WE WANT EVERYTHING. We want the university, this bankrupt institution of a bankrupt society, to grind to a fucking halt. One occupation is not enough.

We need to clear up a little misunderstanding. We are not the general assembly. We will not get what we want through endless discussion, but by taking action. TAKE ACTION.

Listen: we are getting fucked by this crisis. The crisis is not an ‘unlucky’ turn of events. It is the culmination of a long-term trend. Things are not going to simply ‘get better’, and anyway they were never enough.

But know this: the administration is just a cog in the machine; they aren’t going to help us. We’d do best to ignore them just as they are ignoring us.

The administration hopes that we’ll blow off steam. That we’ll go back to ‘business as usual’. WE CAN’T GO BACK.

No one will give us what we want, we have to TAKE IT.

This is not about those of us inside this building. This is about what all of us do from here. We’ve show that this can be done. It must be done, again and again and again. 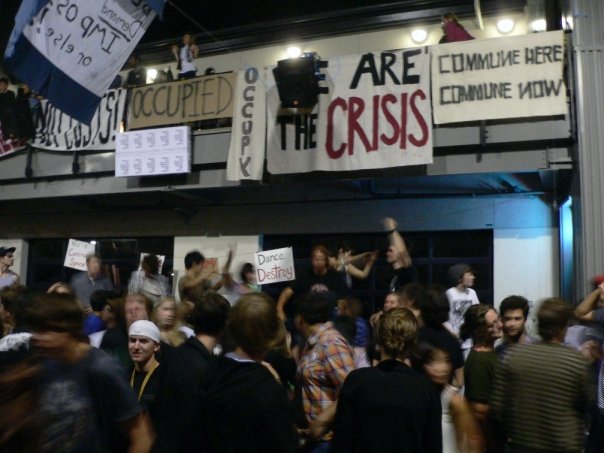 Be realistic, demand the impossible

Many students and workers are learning from our action how to escalate their own resistance against leaders who are failing to protect our education system. We hope this occupation and our future actions will also help catalyze people throughout the state of CA to fight back against the budget attacks on their communities. All universities are being run like corporations, and the situation has become unacceptable. Now is the time for students across the nation to fight back. We have received statements of solidarity from around California, the United States, and the world. This is a struggle situated here, on our California campuses, but it is directed far beyond.

We leave not to retreat but to plan further modes of escalation. We leave knowing that countless others out there are planning, gathering support, innovating, and strategizing. This is the end of this particular action, but it is only the beginning of more actions everywhere, again and again, as long as it takes.

We’ll see you in the very near future.

THE OCCUPATION
http://occupyca.wordpress.com
Add Your Comments
LATEST COMMENTS ABOUT THIS ARTICLE
Listed below are the latest comments about this post.
These comments are submitted anonymously by website visitors.