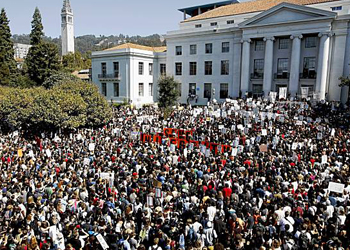 On Thursday, September 24th, actions against the budget cuts, fee hikes, layoffs and furloughs at University of California campuses took place throughout the UC system. Workers, graduate student employees, staff and faculty held a strike, walked out, and demonstrated in defense of public education and fair labor practices.

Under the cover of the summer months, the UC administration pushed through a program of fee increases, enrollment cuts, layoffs, furloughs, and increased class sizes that harms students and jeopardizes the livelihoods of the most vulnerable university employees. According to one analysis, with the next round of proposed fee increases (32% over the next year) UC would be funded more by student tuition than by the state, effectively making it a private university. Even with furloughs going ahead for many UC employees, management is laying off workers, cutting services, and planning to reduce in-state student enrollment to make room for nonresidents.

On September 23rd, students, faculty and staff joined together at the SFCC Mission Campus to speak-out against the massive attacks on education and to encourage organizing in solidarity with the UC statewide strike and a Northern California Educational Workers and Students conference at SFSU on September 26th at the SFSU Student Union.

On September 24th on the UC Berkeley campus, the day started with picket lines and teach-outs happening around campus, with a mass rally and march at noon and a general assembly in the evening to plan the next steps forward.

On September 24th at the UC Santa Cruz campus, picket lines began at 6am followed by a noon rally and afternoon general assembly at the base of campus. Also, students at UCSC began an occupation of the Graduate Student Commons as part of the day of action at all UCs across the state. The occupation lasted until October 1st.

Over 1,000 UC San Diego students and supporters walked out, marched and rallied on September 24th, the first day of the fall quarter, to protest tuition increases, pay cuts and furloughs, administration pay raises and privatization of the UC.

The Associated Students of the University of California (UC Berkeley Student Government) endorsed the walkout unanimously saying that "Never before has there been such a large-scale single action across all of the UCs. For the first time, we have seen an alliance being built among students, faculty and staff all taking a strong stand against the erosion of the quality, accessibility and affordability of our UC education. United, we are confident that we can fight these budget cuts, oppose the enormous fee increases being proposed, and preserve the excellence of the UC public education system at this very pivotal moment in time."