Newswire
Calendar
Features
Home
Donate
From the Open-Publishing Calendar
From the Open-Publishing Newswire
Indybay Feature
Publish to Newswire
Add an Event
Related Categories: East Bay | Labor & Workers
UC Berkeley 9/24/2009 One Day Mass Walkout & Mass Rally-Workers and Students Speak Out
by Labor Video Project
Monday Sep 28th, 2009 9:24 AM
On September 24, 2009 over 5,000 workers, students and staff at the University of California walked out, struck and rallied against the attack on public education through privatization, destruction of jobs and massive increase in fees. This video shows what the issues are for many who took place in this mass action. 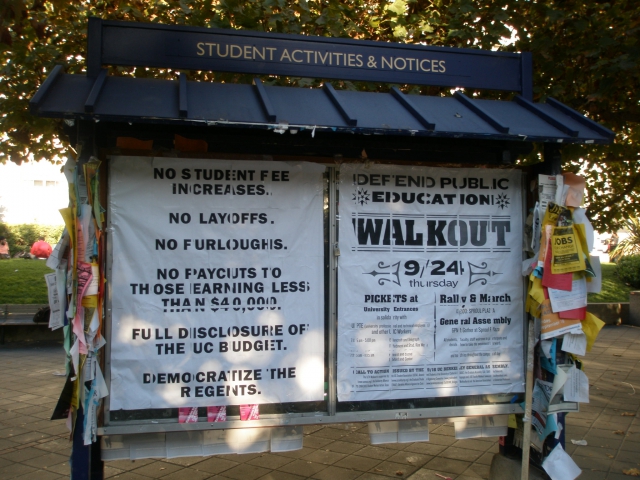 UC Berkeley One Day Mass Walkout & Mass Rally-Workers and Students Speak Out
9/24/09
UC Berkeley workers and students speak out about why they are taking part in the largest mass worker/student protest in decades at UC Berkeley. This strike, walk-out and mass rally focused on the privatization of the university eliminating jobs and destroying the future of working class, immigrant and minority youth to an education.
Production of Labor Video Project,
P.O. Box 720027, San Francisco 94172
http://www.laborvideo.org laborvideo.blip.tv
(415)282-1908
http://blip.tv/file/2654485
Add Your Comments
Support Independent Media