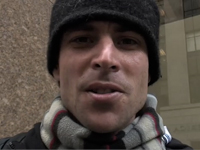 On April 9th, No Justice No BART assumed control of BART's Board of Directors meeting. After numerous community activists spoke during the meeting takeover, Gabe Meyers independently threw a small amount of red paint onto BART General Manager Dorothy Dugger and Assistant General Manager Marcia deVaughn. He was tackled and arrested on the scene by BART police. He was originally charged with three counts of battery, vandalism, and disturbing a public meeting. On September 4th, Gabe Meyers accepted a plea bargain that was offered to him by the judge in his case, for just the disruption of a public meeting charge. In the courtroom, the judge described Gabe's action as civil disobedience in the tradition of earlier civil rights and Vietnam-era anti-war protests that shaped our society. On November 4th, Gabe is scheduled to either begin his alternate sentence of 30 days labor in the Alameda County Sheriff's Work Program or to report to jail.

Gabe Meyers speaks about throwing red paint on BART General Manager Dorothy Dugger: "I felt that a strong statement of protest was necessary and I had decided to act.... I think the only way that things are going to get done is the way in what this judge has talked about in how this society has been shaped before, the way people have done it in the 50s and 60s when they fought for civil rights, and that's in terms of protest, and that's in terms of civil disobedience, and that's in terms of saying what you do at BART, what the BART police have done, what the District Attorney's office has done, is unacceptable and we're not going to tolerate it. That was my attitude that day when I splattered the paint. It's unacceptable. I wanted to let the BART Board know in a big way.... And I was willing to go to jail."

Previous Indybay Reports About or By Gabe Meyers:

Tristan: Gabe Meyers & Starhawk | Last time there was a big problem | The Scapegoat's Tale: An Interview with Gabe Meyers | Josh is free, but others should be in prison |

Gabe Meyers is Free! | What I got to say | Opening Arguments in the Trial of Gabe Meyers | Gabe Meyers Invokes Right to a Speedy Trial Pre-trial Hearing for Gabriel Myers on July 20th | Support anti-G8 activist Gabriel Meyers |