Add an Event
Newswire
Calendar
Features
Home
Donate
From the Open-Publishing Calendar
From the Open-Publishing Newswire
Indybay Feature
Publish to Newswire
Add an Event
Related Categories: San Francisco | Fault Lines | Police State & Prisons
The Scapegoat's Tale: An Interview with Gabe Meyers
by Matt Gereghty (info [at] faultlines.org)
Saturday Jun 23rd, 2007 7:39 PM
Fault Lines interviewed Josh Wolf and Gabe Meyers, the two people targeted by the federal and local authorities after the July 8, 2005 Anarchist Action Anti-G8 demonstration in San Francisco. Anti-capitalist protests and demonstrations against the G8, WTO, and other institutions that represent neo-colonial domination and corporate globalization have always been met with more aggression and hostility than normal marches for peace. Granted, these demonstrators are often much more militant. With a police officer injured and a police car damaged, the authorities felt a need to subpoena and prosecute. 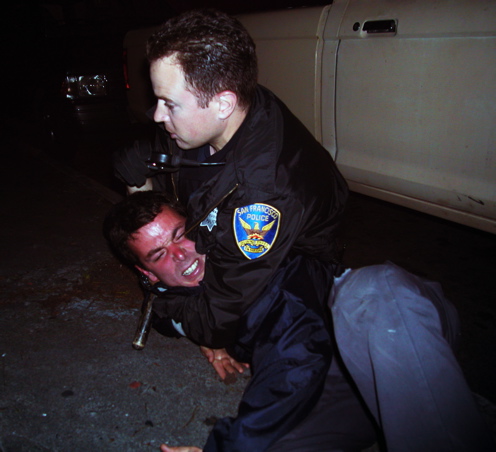 From Fault Lines #21
http://indybay.org/faultlines
Add Your Comments
Support Independent Media
We are 100% volunteer and depend on your participation to sustain our efforts!