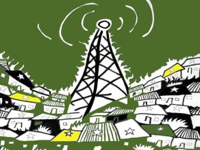 On Friday, September 11th, at 8pm in the Beach Flats Community Garden, the Santa Cruz Guerilla Drive In presents A Little Bit of So Much Truth, the story of Oaxacan people taking control of the local media in the summer of 2006, in order to tell their own stories of struggle and action in the face of repression. After the annual teachers' strike was attacked in June, civil society took over Oaxaca City, expelling politicians and police from their desks, stations, offices, and palaces. But to defend their city, to defend their lives, the people of Oaxaca also took over radio stations to broadcast their message, and at one point a Womens' march took over the state television station to broadcast the voices of women who could no longer be slandered by the television of the rich. Read more