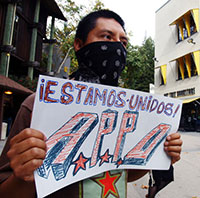 Tuesday, November 21: According to APPO, yesterday's march and following street battle that began after police threw rocks, resulted in 15 detentions and 56 injuries, 3 of which are severe head injuries. Early morning on Tuesday, at 12:30, armed supporters of the PRI party ransacked and burned tents at the APPO encampment in Santa Domingo. During the day 2 people were detained at the Cinco Senores barricade while government forces were attempting to take it down, and it is reported that one of these two has a gunshot wound and was severely beaten. Today 10 APPO women began a hunger strike in Oaxaca City, as calls were put out for caravans to travel to Oaxaca from around Mexico for a day of action on November 25th, where the popular uprising will attempt to encircle the police stationed at the city center. APPO Press Release Denouncing Police and PRI | New York City Indymedia Statement about the Investigation of Brad Will Murder

On Monday, the PFP clashed with APPO supporters. At several confrontations, tear gas was used, and many were injured. Barricades went up around Santa Domingo, which is where the APPO encampment is located. After 4:30pm, a truce was declared and protesters began negotiating for the release of 5 people who had been detained. Minute-by-Minute Report |

Photos and Audio by Danielsan

Following the call put out by the Zapatistas for a nationwide general strike in Mexico on November 20th, actions were held all over the world. In San Francisco activists called for a convergence and critical mass at 4pm. Approximately 150 protesters marched during rush hour traffic, blocking the entrances to the Oakland Bay Bridge. Two banners were hung at the entrance to the freeway. Mock body bags were piled in front of the consulate as red paint was splattered on to the doors. The doors to the Mexican Consulate were locked by demonstrators.