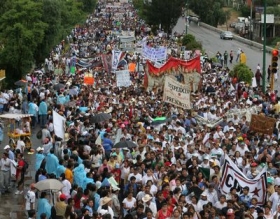 On June 12th, a strike by the Síndicato Nacionál Trajabadores Educativas (SNTE) teachers’ union, was entering its fourth week. As the strike dragged on, teachers started to solicit signatures to depose Ulises Ruiz Ortíz as governor of the state.

On June 14th at 4:30 a.m., some 3000 police and firemen began to violently remove the sit-in of 70,000 workers from Section 22 of the National Union of Education Workers (SNTE) with tear gas, smoke grenade, stun grenades and firearms.
Update | Teachers and Children Massacred By State Police | Bulletin from the 6th Commission of the EZLN | Police Unleash Repression Against Oaxaca Teachers | Radio University Oaxaca Closed By Police | Democracy Now Report

On June 15th, a raucous and exuberant crowd of teachers, some armed with metal poles or machetes, reoccupied the Zócalo at noon. They were joined by students from the Benito Juárez Autonomous University of Oaxaca, the Technological Institute, and several high schools. Read More

On Friday June 16, a third teachers’ march in Oaxaca brought out all sectors of civil society in a vast repudiation of the repressive policies of Governor Ulises Ruiz Ortíz. The march was the direct response to the brutal police attack on the encampment of striking teachers in the center of the city at dawn on June 14.
Read More | Mega protest march in Oaxaca

Also on Friday, Teachers for Social Justice called a picket at the Mexican Consulate in San Francisco. Thirty teachers from United Educators of San Francisco and the American Federation of Teachers at City College demonstrated and delivered a letter of concern which the Consulate promised to forward to the PRI governor of Oaxaca. Announcment | Photos & Video