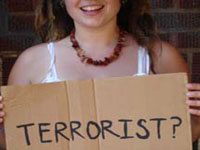 On May 21st, the Center for Constitutional Rights (CCR) and the Civil Liberties Defense Center (CLDC) joined in a defense attorneys’ motion in the U.S. District Court in San Jose to dismiss U.S.A. v. Buddenberg, a federal prosecution of four animal rights activists in California—known as the AETA 4—for alleged conspiracy to commit animal enterprise terrorism. The four have been charged with conduct that includes First Amendment protected activities such as protesting, chalking the sidewalk, chanting and leafleting. The motion asks the Court to strike down the Animal Enterprise Terrorism Act (AETA) as unconstitutional.

“To characterize protest and speech as terrorist activities is ludicrous,” said CCR cooperating attorney Matthew Strugar. “And it is not just animal rights activists who are in danger here. The AETA is so broad and unclear it could be used to suppress lawful protests and boycotts by any activists across the spectrum, no matter what the issue. The law must be struck down.”

Passed by Congress in November, 2006, the AETA is aimed at suppressing speech and advocacy by criminalizing First Amendment-protected activities such as protests, boycotts, picketing and whistleblowing. It targets animal rights activists, but includes language so broad and vague it could be used to prosecute labor activists who organize a successful boycott of Wal-Mart, or union folks who picket a university cafeteria. Pushed through Congress by a powerful lobby of corporations and research institutions, the AETA is an unconstitutional law, because it criminalizes a broad swath of protected First Amendment activities and is so unclear as to fail to give people notice of whether or not their conduct is lawful.

The Center for Constitutional Rights created an online petition for people to write their senator and representative to demand that they repeal the AETA.