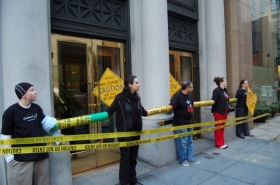 Activists Lockdown at Israeli Consulate in San Francisco as Gaza Massacre Intensifies
Protesters Call for an End to US Support for Israel as Death Toll Rises Over 1,000 in Gaza

Shortly after 8:00am, on January 15th, about 45 Palestinian, Jewish, immigrant rights and prison abolitionists prevented the Israeli consulate in San Francisco (456 Montgomery) from opening by chaining themselves to the doors with locks and tubes in protest of Israeli apartheid and the current attacks on Gaza. In a statement, they call for an immediate ceasefire; the opening of land, sea, and air borders to allow in emergency supplies; and an end to US financial and political support for Israel. Nine people were arrested for blocking the doors and refusing to move.

This action follows the lockdowns at the Israeli consulate in Los Angeles, and the Israeli embassies in Montreal and Toronto. The Palestinian death toll now stands at over 1,045. Israel is continuing to escalate its assault on Gaza. In the past day alone, Israel has hit many civilian targets in Gaza City, including a UN building, a hospital, and a building housing several media organizations.

Other Updates From Palestine: PFLP calls for takeover of Israeli embassies and broad popular front |

Is Israel Using Banned and Experimental Munitions in Gaza? |