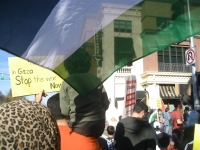 On Sunday, January 11, more than a thousand people demonstrated against Israeli attacks on Gaza in a suburban shopping district in San Jose, California. This was the second Sunday in a row that demonstrators, many dressed in the colors of the Palestinian flag, started their protest by chanting and wielding signs in front of a typical 1960's era shopping strip. They then stopped traffic as they filled the streets a block away in a fashion district featuring luxury retailers.

Demonstrations at "Peace Crossroads" at the corner of Winchester and Stevens Creek Boulevards in San Jose were sporadic before 2001, but have been held every weekend since the US invasion of Iraq. With the Israeli attack on Gaza that began at the end of last year, record numbers of people are showing up in demonstrations that have taken on a colorful red/white/green/black theme. On January 4th, approximately 1,200 people gathered at the Winchester Shopping Center, a shopping strip with BevMo and David's Bridal chain stores. The parking lot and corner quickly filled with suburban families, including many women and children. As more people arrived, they soon filled all four corners of the intersection.

An impromptu and peaceful march headed down towards the tony Santana Row district after about two hours at the shopping strip intersection. There protesters marched pass high-end luxury retailers such as Gucci and Brooks Brothers, filling the streets and temporarily halting all traffic in the privately owned shopping district. Police were on hand to monitor traffic and there were no arrests. A similar scene with close to an equal number of demonstrators followed the same march route the following Sunday.

With no ceasefire in sight, and the Israeli attacks on Gaza escalating daily, protesters have vowed to continue their outcry. Demonstrations are now scheduled for Saturdays and Sundays from noon starting in front of the "old" shopping strip. A weekday demonstration has been added to the schedule of organized protest. Demonstrations at the corner of Stevens Creek and Wnchester will be held on Mondays from 5:30 to 6:30pm "for as long as the people of Gaza are suffering" say organizers.