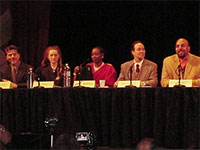 On January 13th, candidates whose names will appear on the California Green Party primary ballot on February 5th came together for a debate in San Francisco. Cindy Sheehan was the moderator, and Cynthia McKinney, non-candidate Ralph Nader, Jared Ball, and Kent Mesplay were in attendance. Elaine Brown did not be participate, as she recently resigned from the Green Party.

Voters who wish to change parties or re-register with new addresses must send in their registration forms by January 21st in order to be able to vote in the February 5th primary. The party will soon be recruiting voters to serve as delegates to the Nominating Convention in Chicago on July 10th - 13th.

Bay Area Green Party organizations have been busy in the leadup to the primary. The Marin Green Party held a Council Meeting in San Rafael on January 8th. California Green Party working groups gathered for a retreat in Palo Alto on January 12th.