Add an Event
Newswire
Calendar
Features
Home
Donate
From the Open-Publishing Calendar
From the Open-Publishing Newswire
Indybay Feature
Publish to Newswire
Add an Event
Related Categories: San Francisco | Government & Elections
Green Party Presidential Debate in San Francisco: Show of Unity?
by Robert B. Livingston (gruaudemais [at] yahoo.com)
Sunday Jan 13th, 2008 11:23 PM
It was not without trepidation that I attended the Green Party Presidential Debate today at the Herbst Theatre in San Francisco-- and despite moments of inspiration, cheer and hope... I left mystified. Will the Green Party enter the 2008 Presidential race strong and unified-- or will it continue to become increasingly marginalized by a leadership more concerned with creating pockets of influence than with igniting an authentic and diverse national movement capable of substantially challenging the status quo of a country increasingly controlled by corporations? 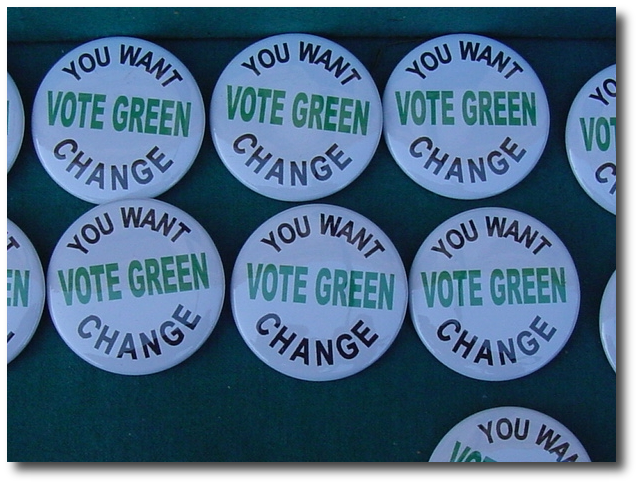 "What is missing?" I kept asking myself from the moment I arrived at the Herbst Theatre this afternoon.  It seemed all of the keys were in place for a dramatic and catalytic presidential debate that would put the trivia of the the two-party presidential debates in a spotlight.  Despite the full house and exhuberent audience participation, somehow that never quite happened.

Earlier I had encountered Cynthia McKinney and confessed to her that my dream would be for Nader to throw his support behind her campaign-- and I could see in her eyes that she truly hoped so also... but she also looked as if she hadn't any idea what Nader had in store.  It remains to be seen if Nader will declare his own independent candidacy-- to broaden debate about the issues he cares most about?

After seeing McKinney, I saw Nader, looking weary and somewhat disappointed, huddling with his advisers-- something did not seem to be happening according to plan.  I was never able to talk with any of them, although I had hoped to do so.

During an intermission, I encountered a few prominent local Greens huddling-- what were they talking about?  They shooed me away-- whatever it was they did not want me to know.

Whatever was going on, the full audience were treated like children-- no one ever explained why Nader was not to share the stage with the Green candidates.  All that was announced was a terse message that the organizers had been informed 48 hours before the event that he would not appear with the Green Party candidates and that he was not an official candidate.  Was Nader going to announce his own independent run for the presidency?  I was told later that Nader had not yet declared. (Indeed, before the event Green Party organizers said that Ralph Nader's office had asked them to state that he is not a candidate.)

I was also told after the event by Aimee Allison that Nader had not shared the stage with the Greens for "legal" reasons:  was that a way of saying that rules set up by those who set up the debate could not allow him to share the stage-- or was it his own agenda that disallowed him from sharing the stage?  I was never sure.

At one point Cindy Sheehan, one of the moderators, asked Nader about his potential candidacy.  Alone on the stage, Nader quipped about building bridges to the Green Party and embarked upon an eloquent diatribe against the control corporations increasingly have over our country-- a control that can be described as being fascist.  He said that on the issues, the Green Party as compared to the two corporate parties (Republican and Democratic Parties) was as different as day and night. He suggested that internal conflicts and excessive rule-making within the Green Party did not much interest him and advised that the Party grow by keeping its focus on the issues it professes to be concerned about-- and by organizing. Much of Nader's soliloquy on a host of issues was devoted to advising the party to become angry and energized by the increasingly negative turn our country has taken in recent years.

So what happens next?  I wonder-- and I'm sure many people wonder.  Will Nader run?  If he does-- what will that mean for the Green Party? What will that mean for Cynthia McKinney's campaign? (At one point in the debate, Jared Ball declared that the debate was less a debate than a discussion of unanimity of support behind Cynthia McKinney, clearly the most popular of the candidates that shared the stage.)

Rather than leaving the event energized-- I left mystified-- except for one thing:  clearly Nader and the Green Party candidates virtually share the same interests.  All the debaters were eloquent and sincere.  The audience all hoped for unity and purpose. All were solidly behind Cindy Sheehan's independent congressional campaign in San Francisco against Nancy Pelosi.  Both Nader and McKinney appeared bent toward making the critical issues of our day tantamount to any party bickering or conflict.

The crowd was told at the start that Ralph Nader would appear separately from the Green Party candidates, which he did after they debated.  He never shared the stage with them.

Disclosure:  I endorsed Ralph Nader at draftnader.org (which never published my comment that I hoped Cynthia McKinney would declare her candidacy.  I afterwards endorsed Cynthia McKinney.  My hope continues to be that Nader and McKinney could find a way to run together.  I am a charter member of GDI, Greens for Democracy and Independence-- I believe that an authentic and strong Green Party requires transparency and valid representation-- it should not endorse candidates in the corporate parties.

It is my understanding that today's event will be broadcast and reported widely-- as soon as possible I hope to provide links to such in the comments section.  I hope others will make productive comments and corrections below.
§Herbst Theatre where the event took place
by Robert B. Livingston Sunday Jan 13th, 2008 11:23 PM 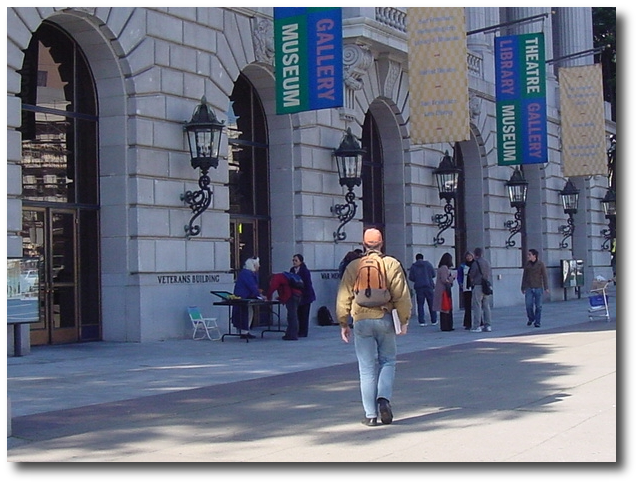 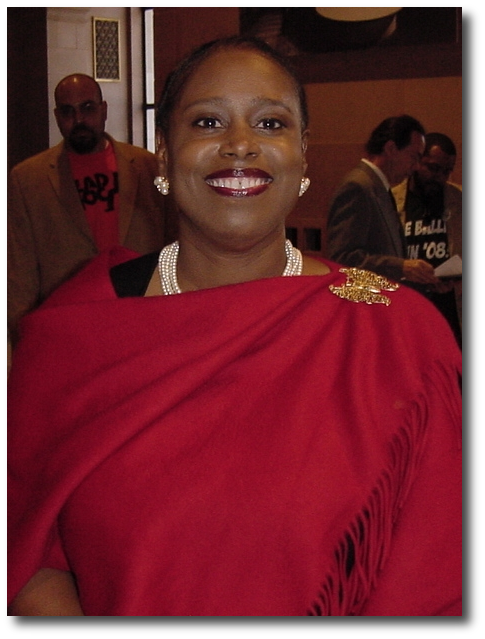 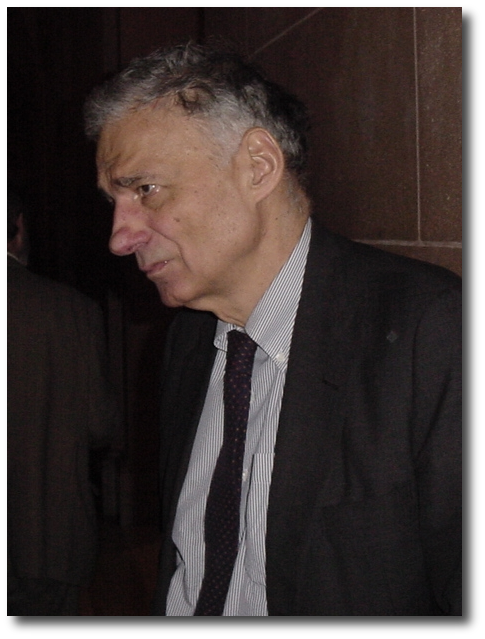 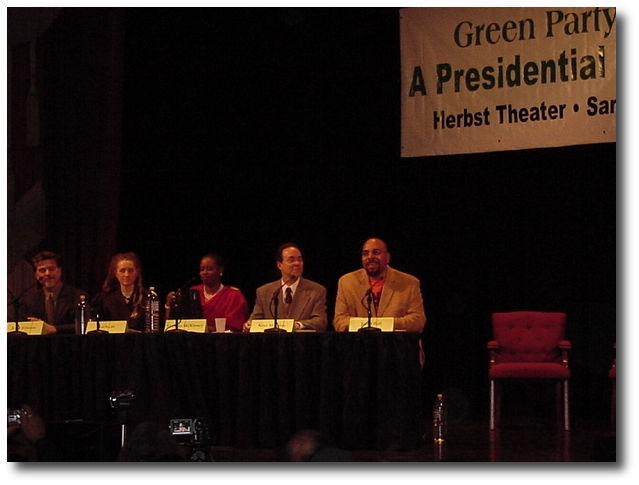 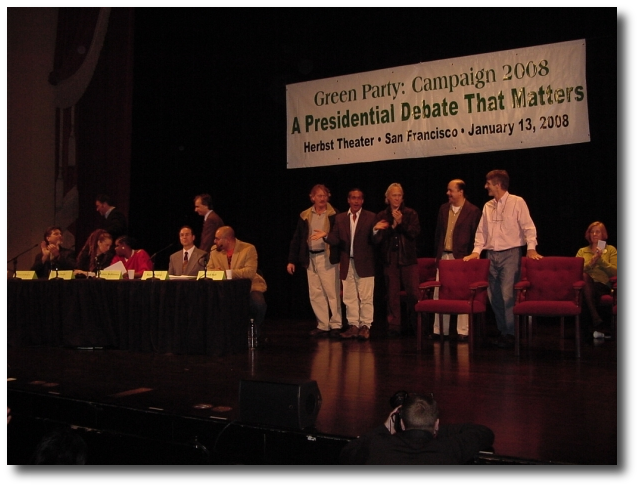 Cindy Sheehan, an independent candidate for congress is seated on the right. 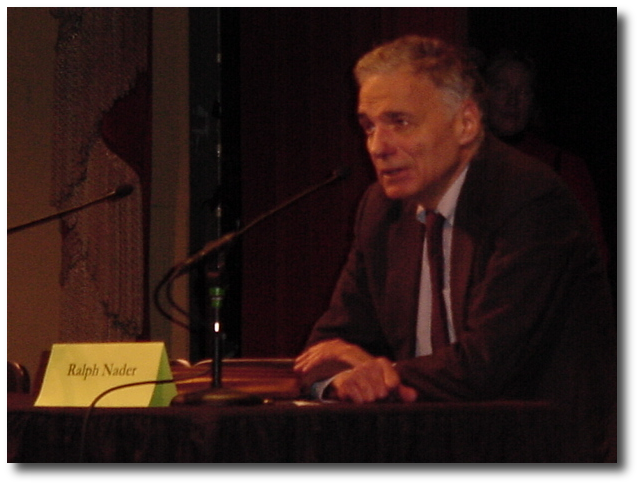