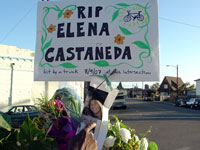 In yet another bicycle tragedy, Elena Castaneda was run over and killed some time around 8am on August 9th by a large dump truck at the intersection of West, Isabella, and San Pablo in Oakland. Elena Castaneda was recognized by locals and known to pass up and down San Pablo every day on her bike. Castaneda's death is eerily similar to the death of John Msylin on August 7th in Santa Cruz who was also run over and killed by a large truck while cycling.

Memorials were set up for cyclist Elena Castaneda that evening. Several people present who actually witnessed the accident said that the intersection has long been a problem and many predicted it was only a matter of time before someone was killed there. Wrecklessly, cars zip around the blind corner from San Pablo southbound to West Street all day every day. Locals reported that they have complained to neighborhood groups and police for years about the dangers of this intersection and the likelihood that someone would get seriously hurt eventually. After years of car accidents at the complicated 6-way intersection, Elena Castaneda was struck by a truck and killed there.