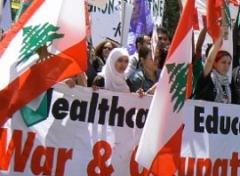 There was also a national emergency protest at the White House in Washington DC, as well as local protests in Los Angeles and Seattle on August 12th. ANSWER Coalitions cities such as New York and Chicago mobilized people to go to DC, and people in cities such as Santa Cruz organized carpools to get to San Francisco.