Add an Event
Newswire
Calendar
Features
Home
Donate
From the Open-Publishing Calendar
From the Open-Publishing Newswire
Indybay Feature
Publish to Newswire
Add an Event
Related Categories: Palestine | San Francisco | Police State & Prisons
Police Aggression at Civic Center Rally
by Copwatch (berkeleycopwatch [at] yahoo.com)
Saturday Aug 12th, 2006 7:14 PM
Video footage of police assaulting protestors at the Civic Center protest against the war in Lebanon. Duration 3:03 minutes. A series of stills taken from the video.
Copy the code below to embed this movie into a web page:
Download Video (7.8MB) | Embed Video
This video was taken at the demonstration at SF Civic Center on August 12th, 2006. It was unclear what started the incident. Police rushed in, jabbing people with clubs, pulling one person over a barricade, taking a guy down and injuring his head, while one cop seems to have climbed on top of a woman. Hopefully better footage of this event will come in.
§bodyslam
by Copwatch Saturday Aug 12th, 2006 7:14 PM 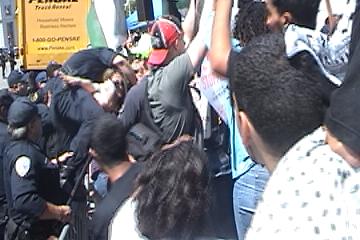 Note on left the cop on top of the woman with his arms around her.
§bodysnatchers
by Copwatch Saturday Aug 12th, 2006 7:14 PM 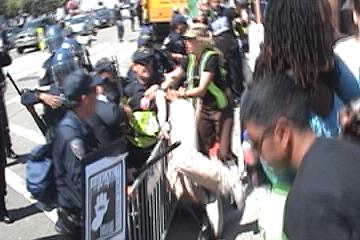 Cops pull an ANSWER volunteer over the barricade (headfirst to the ground).
§bodysnatchers2
by Copwatch Saturday Aug 12th, 2006 7:14 PM 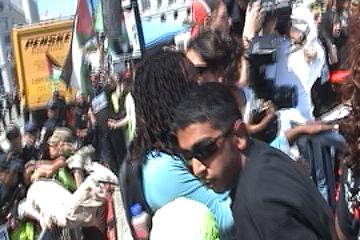 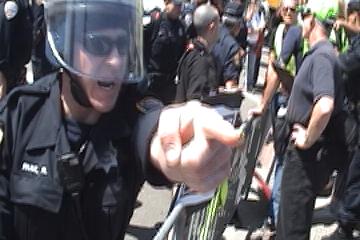 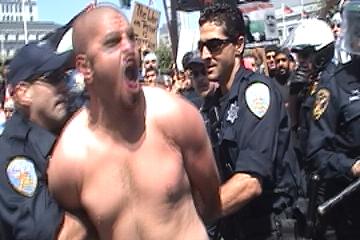 It is hard to tell from the video and the still, but this guy is bleeding from a head-injury, presumably cop-induced. This guy was arrested.
Add Your Comments
LATEST COMMENTS ABOUT THIS ARTICLE
Listed below are the latest comments about this post.
These comments are submitted anonymously by website visitors.