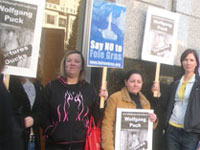 Even with the recently passed legislation in California outlawing production and selling of foie gras in 2012, animal rights activists are not waiting idly by for the new law to take effect. Restaurants that continue to sell the supposed delicacy are being targeted in a variety of ways, in California, coast to coast, and internationally. A growing number are heeding the call to stop serving the bird livers enlarged by forced-feeding, sometimes simply by being informed of the cruelty inherent in the production process without any activist demonstrations whatsoever. Locally, restaurants in Marin and Walnut Creek recently dropped or are seriously considering dropping foie gras. New laws are being passed in other countries. And while numerous businesses are so far refusing to change, and some "victories" as tenuous at this point, it appears the tide is turning on foie gras slowly but surely.